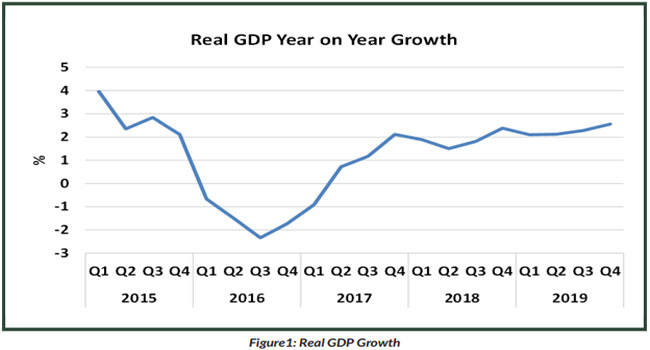 The nation’s Gross Domestic Product (GDP) has recorded the highest growth since the recession in 2016, experiencing growth of 2.55 per cent (year-on-year) in real terms in the fourth quarter of 2019.

This was revealed in the latest report released by the National Bureau of Statistics (NBS).

The figure shows an increase of 0.17 per cent points compared to the fourth quarter of 2018 which recorded a growth rate of 2.38 per cent.

According to the data agency, the GDP growth also represents an increase of 0.27 per cent points when compared with the third quarter of the year under review.

It explained that this was higher than the fourth quarter of 2018 which recorded an aggregate of N35,230,607.63 million, representing year on year nominal growth rate of 12.34 per cent.