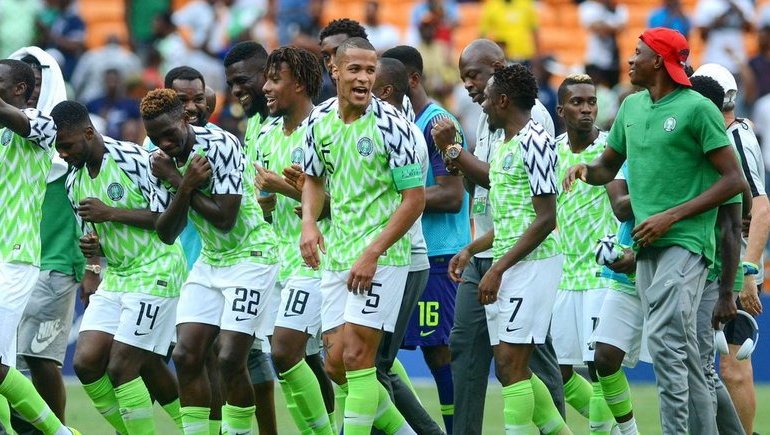 The Super Eagles of Nigeria are through to the semi-finals of the AFCON 2019 after a 2-1 victory over Bafana Bafana of South Africa. Nigeria beat South Africa 2-1 in a dramatic encounter at Cairo International Stadium on Wednesday night.

Samuel Chukwueze’s opener in the 27th minute started the action in the game putting Super Eagles ahead. South Africa’s aid came when Bongani Zungu scored in the 71st minute.

However  let the game go in the 89th minute when keeper Ronwen Williams failed to clear a corner kick, allowing William Troost-Ekong to easily score into an inviting net.

Nigerians on twitter are having a field day celebrating the Super Eagles and throwing shades at the defeated Bafana Bafana team.

Check out some hilarious tweets below:

Nothing to see here, just Messi taking A selfie with his Idol Chukwueze #NGARSA #SuperEagles pic.twitter.com/WLiEmtPeJt

Whenever i see Iwobi with the ball, i'm like OMO GUNNER NIYEN!! I think the set up to chukwueze's goal is pure Arsenal tactics. Argue with your keyboard #SuperEagles pic.twitter.com/XEjGrNBBvJ

Egyptian fans have chosen the side to support in #NGARSA.#AFCON2019pic.twitter.com/9MHds9e8jx

Banana Banana of South Africa, #SuperEagles have eaten you guys up tonight with groundnut. ? #NGARSA pic.twitter.com/KCopSkW1Su

We 1-2 thank South Africans for providing DSTV so we can watch the #SuperEagles defeat the #BafanaBafana#NGARSA #AFCON2019 pic.twitter.com/ajEbj4DGhV

We're using their Dstv and we still dey beat them ? is this not bully? #TotalAFCON2019 #AFCON2019 #musa #chukwueze #SuperEagles #RSANGA #NGARSA pic.twitter.com/rJZBrDWlvY

Super Eagles of Nigeria Be Cruising into the Semi Finals Like: #NGARSA pic.twitter.com/3n2rsPJQTt

Related Topics:2019 AFCONAFCONsuper eagles
Up Next