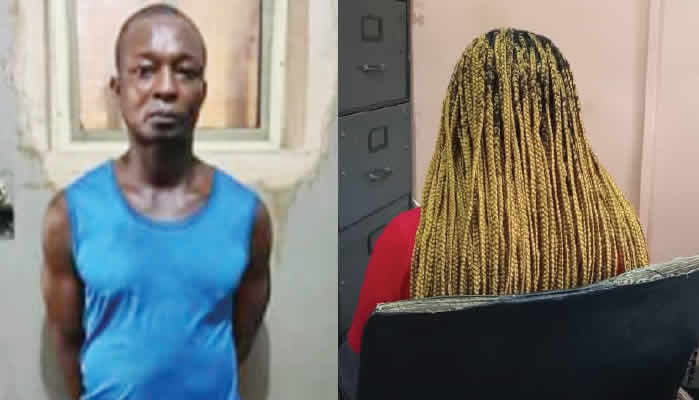 The victim told City Round that the suspect was his father’s friend and colleague when they both worked as security guards at a popular church based in the Ijesa area of Lagos State. She said despite her pleas, he raped her and boasted that nothing would happen to him because he would bribe the police and be freed.

“I tried to resist him but he brought out a knife and threatened to kill me,” she added.

Blessing stated that after her father lost his sight and left the employ of the church about five years ago, things became difficult for them and Odih offered to help the family from time to time.

The victim, who works as a point of sale terminal attendant in the Ijesa area of the state, said, “He and my dad used to work with the church as security guards before he began working for the church as an informant. My father lost his sight about five years ago, so he stopped working and had to be staying at home, so things became tough. He used to send money to my dad occasionally.”

On the day the incident happened, Faith said she had returned from work around 9 pm when her father asked her to go and collect the money the suspect, also known as ‘king of boys,’ promised him.

“I asked if it was because of the N5,000 he gave me that he was making such a demand, and I told him to give me his account number. He did and I transferred his money back to him immediately. I have the evidence.”

“Immediately after he received the money, he brought out a knife, locked the gate, and asked me to undress.”

According to her, the incident took place on vacant land on Alakoso Road, Ijesa. She said the premises had high walls as perimeter fencing and a big gate which he said was locked with a padlock and that even when she screamed no one came to her rescue.

“I ran towards the gate of the vacant land, hoping I could force it open, but he ran after me and dragged me back. The fence was high, so there was no way I could escape. I was shouting and calling for help but he said no one would answer me. He lived in a small security house on the premises.

“I refused to remove my clothes and tried to run back to the gate but he charged at me, threatening to stab me. His eyes were red and I didn’t want to lose my life. When he was done, I asked him to open the gate but he refused. He said he would do another round. I was alarmed and kept screaming but no one responded.

“Then, he brought out his knife again and I was forced to endure the trauma the second time. I screamed but no one answered. He said he would kill and bury me there and nobody would know. He boasted that he would even give me money to go to FESTAC police station to report but that nothing would happen to him because he knew how he would bribe the policemen.”

She said after a while Odih slept off, she managed to retrieve the key and escape around 3 am.

Unknown to Faith, he recorded the act with his phone with the aid of the flash, which she thought was an ordinary torch.

She told City Round that she cried all night and could only tell her brother. “I didn’t tell my dad until two days after because I knew it would break him and it really did.”

Confused on what to do, she said she reported the case at the Ago Police Station and notified the founder of Jashabel Touch-A-Heart Foundation, a human rights organization, Mrs. Favour Benson, who had been monitoring the case.

Blessing said police arrested Odih, checked his phone, and saw about 20 videos of him having sex with different women, including her.

She said the matter had since been referred to the State Criminal Investigation Department, Panti, for further investigation.

She said, “I want justice. I have been receiving calls from unknown persons telling me to drop the case and they have been making threats.”

She said the result of the test she undertook at the Mirabel Centre in Ikeja was already with the police in Panti, hoping that justice would be served. “I have not been able to erase the incident from my mind,” she added.

Speaking on the status of the matter, the lawyer assigned by a non-governmental organization, Project Alert, to handle the case on Blessing’s behalf, Samuel Apologun, told our correspondent that he was on the matter.

One dead in Onitsha auto crash