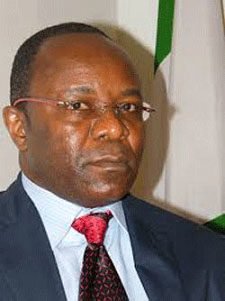 According to him, previous governments failed to exploit the opportunity of the Deep Offshore Act that made provision for premium element to be shared once the price of crude exceeds $20 a barrel.

Kachikwu spoke to reporters at the end of the FEC meeting chaired by Vice President Yemi Osinbajo at the Presidential Villa in Abuja.

He was with Minister of Transportation Rotimi Amaechi, Minister of Niger Delta Affairs Usani Uguru Usani and the Senior Special Assistant on Media and publicity, Garba Shehu.

Kachikwu said “The first and most substantial for me is the decision to work with the Attorney-General to amend Section 15 of the PSC of the Deep Offshore Act.

”Under the Deep Offshore Act, there was a provision in 1993 that once the price of crude exceeds $20 a barrel, the government will take steps to ensure that that premium element is then distributed at an agreed premium level for the Federal Government so that we get more for our oil.

”But over the last 20 years, nothing really was done. From 1993 to now, cumulatively, we have lost a total of $21 billion just because government did not act. We did not exercise it.

”One of the things we’ve worked on very hard over the last one year is to get that amendment because once we do, the net effect for us is close to $2 billion extra revenue for the federation.

”Let me just say that however we do it, we would definitely try to see whether a possibility exists for claw back some advantages. Let me just keep it at that.”

The minister reiterated that there was no plan to increase the pump price of fuel.

Speaking on the billions spent to maintain existing refineries and efforts to build new ones, he said: “I believe that the refineries can be fixed, we came up with a model to find private sector funding into these refineries that’s being done, we expect that before the end of this year, we will at least get to the final contracting stage in terms of announcing those who are going to take this up, it takes about six months to do this and do it thoroughly but that requires raising close to N2 billion from private sector participants to get this done.

”A lot is being done on refining that is because we have focused on it too much to the point where I have put my credibility on the line and that’s fine and we have said it is important that we stop importing petroleum products there is just no justification for it.

”We have encouraged private sector, Dangote is working very hard, I have told the officials of Dangote that as opposed to the 2020 completion period they are looking at they should assist us by trying to deliver this in 2019 hopefully.

”For our own refineries, if we complete the procurement processes by the end of this year, they would begin their 12-18 months resuscitation or turn around maintenance (TAM).

”If they do that hopefully towards the end of 2019 we should have the three refineries being able to produce for the first time in decades within 425,000 barrels per day name-plate capacity, we are also looking at the AGIP refineries, we are also looking at the Petrolex Refinery that myself and the Vice President went yesterday (Tuesday) to commission, we have commissioned their storage facilities, they have been granted approvals through us for an elevation of their refining plan from 150,000 barrels a day to 250,000 barrels a day. Given the history they have had in the success of building their storage and maritime facilities I believe they can meet up.

”You take the smaller modular refineries where close to nine are getting closer to the point of investment decision you see that wholistically we are addressing the refining thing, if we do that we are looking at refining capability of less than a hundred thousand barrels in real terms infact less than fifty thousand barrels in real terms to refining capability of 1.2million barrels per day, so we will be refining in excess of what our current share in JV crude production is, the reality is this is something that has been there for long and we are addressing it frontally.” he said

According to him, FEC also approved the award of contract of over $2.7 billion to three consortium that will finish up the AKK (Abuja,Kaduna, Kano) pipeline.

He said “The effect of this is that that whole movement of gas from the southern corrector to the north that will enable power generation increase, enable utilization of gas up into the hinterlands finally will be completed.

”One of the things we have suffered is the reaping of gas. We presently have trapped power, trapped gas all in the southern corridors that is going nowhere because of lack of infrastructure.

“So that has now been awarded. You remember that was partially done, this is a contract that has lasted over 13 years, so we got approval for that today and so that is going forward very nicely.” he added

The Minister said FEC awarded a contracts to a consortium for the Odidi pipeline from the Warri and the Southern marshlands in order to move the additional gas bring produced.

He said “Through the NDDC, about 364 million cubic meters of gas to be feed into the AKK pipeline. Its all part of gas gathering mechanism. So the two taken together basically will boost gas delivery in Nigeria, gas delivery for power and begin for the first time to take very definitive steps towards the movement of Nigeria from being a crude nation into a gas environment.” he said

Related Topics:NigeriaOIL PRODUCTION
Up Next