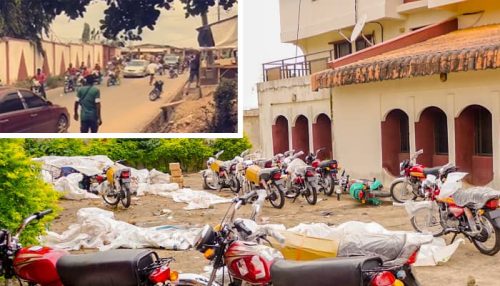 The Ibadan residence of Teslim Folarin, senator representing Oyo central, has been invaded by hoodlums who carted away brand new motorcycles, freezers, grinding machines and other items.

The lawmaker is said to have travelled out of the country. An aide of the senator who preferred anonymity told TheCable that about N250 million worth of empowerment items were stolen from the house.

“I can confirm to you that senator Folarin’s house in Oluyole estate area of Ibadan was invaded this morning by hoodlums,” the aide said.

“They took away items worth N250 million. It was daylight robbery. We could not engage them so they had a field day. The senator was not at the property when the looting happened. It is sad this is happening.”

However, security operatives later arrived the house and apprehended some suspects. The invasion of Folarin’s home is the latest in a series of looting of properties across the country.

Suspected hoodlums have targeted homes of influential persons — including monarchs — and warehouses where COVID-19 palliatives are kept.

The palace of the Soun of Ogbomoso was vandalised on October 11, 2020, during the #EndSARS protest.

On Friday, a warehouse where COVID-19 palliatives were kept in Ibadan was looted by hoodlums, with more than 1,000 bags of rice stolen.

However, the Oyo government, in a statement, said the warehouse and items looted belonged to a private company.

Related Topics:Teslim Folarin
Up Next