Kevin Hart's wife, Eniko celebrates him as he turns 41

Most entertainers are dead broke - Illbliss 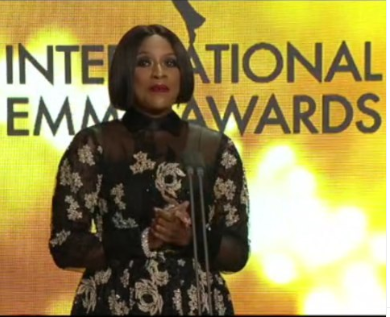 Chief Executive Officer of EbonyLife Media, Mo Abudu, had been appointed as Chair of the 47th International Emmy Awards Gala by the International Academy of Television Arts and Sciences.

The event held on Monday, November 25, in New York City.

She was the first African, male or female, to land the coveted role. Following her appointment as the first African director of the Academy, the move signals a change in the opportunities opening up for television content producers on the continent.

Ms. Abudu launched EbonyLIfe TV in 2013, with a mission to change the narrative about Africa. In 2018, EbonyLife announced a three-series scripted deal with Sony Pictures Television, followed by an agreement with another major US studio to develop an African science-fiction TV series.

“These partnerships are the first of their kind between Hollywood studios and a Nigerian television company. We are happy to be at the forefront of forging these new partnerships because it is truly about sharing our local stories with a global audience – stories that are historical, authentic and progressive.”

Stand-up comedian and actor Ronny Chieng, a correspondent on The Daily Show with Trevor Noah and star of Crazy Rich Asians, will host the gala, while businesswoman, philanthropist, author and former model Iman will present the Directorate Award to CNN Chief International Anchor Christiane Amanpour. Actor Conleth Hill, known worldwide for his role as Lord Varys in Game of Thrones, will present the Founders Award to the show’s creators David Benioff and D.B. Weiss.

to be the Gala Chair of the International Emmy Awards. It was equally an honour to stand on stage and talk about the great strides we have made in Nigeria and at EbonyLife Media in just 6 years of our existence. With a mission to change the narrative about our continent, we launched EbonyLife TV in 2013, a journey that has produced some of the best TV programmes on the continent today. In 2014, we went on to launch EbonyLife Films and over the last 5 years, we have created the highest-grossing films in the history of Nollywood. But I have said time and time again, that it is truly about forming international relationships and partnerships and about telling our stories on a global scale. So it gave the utmost pleasure to talk about our three-scripted deal with Sony Pictures Television. We also signed an agreement with another major American TV studio and channel on an African sci-fi TV series. Also in the works are 2 other projects which include an original IP adaptation as well as a millennial-driven drama. So truly, "if you can think it, you can do it". SIX INTERNATIONAL CO-PRODUCTION DEALS 💃💃💃. GOD IS SIMPLY AWESOME!!! 🙏🏽🙏🏽 THE BIGGEST THANK YOU TO THE EBONYLIFE TEAM FOR ALL THE LOVE, SUPPORT, COMMITMENT AND HARD WORK. Pictures loading soon 💃💃💃 #iemmys #internationalemmyawards #emmys2019