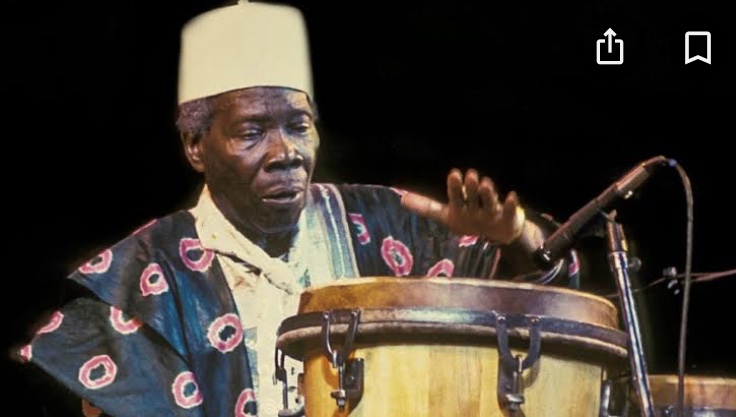 All you need to know about Michael Babatunde Olatunji popularly know as Olatunji drummer Let’s take a look at his Biography, Nationality, Career, Age, Net worth, Family.

Michael Babatunde Olatunji was a Nigerian drummer, educator, social activist, and recording artist.
EARLY LIFE
Nigerian Drummer, Michael Babatunde Olatunji was born in 1927 in Ajido, Lagos state, Nigeria to a successful fisherman who was about to ascend to the rank of village chief before his sudden demise. Olatunji was raised with the idea that he would replace his father as Village chief but this was not meant to be as he was already called to Music by the beating of the drum. As a young boy, he was always found among the master drummers, begging for lessons. This was before he was sent to live with relatives in Lagos, eventually going to school.
EDUCATION
He went to Baptist College, Lagos and learning the English Language. Growing up in Lagos, obsessed with the dream of going to America, Olatunji applied for a scholarship offered for college study in the United States by the Rotary Education Foundation and was accepted to study at historically black Morehouse College in Atlanta.

Olatunji while in school began to educate his fellow students who thought Africa was a place inhabited by people like Tarzan, giving demonstrations at both black and white Atlanta churches, playing a small hand drum he had brought from Lagos and interspersing biblical quotations among his musical explanations. He was elected president of More-house’s student body. He graduated in 1954 and enrolled at New York University in a graduate program in public administration and started a small percussion group to earn money on the side while he continued his studies.
CAREER
Olatunji achieved international fame with his ground breaking Capitol Records debut album, Drums of Passion in 1959. The album was such a success that it remained in print for decades. The album according to his autobiography collaborator, Robert Atkinson, “introduced hundreds of thousands and perhaps millions of Americans to African drumming.” The Master drummers under whom Olatunji learned his craft first started with a cowbell, whose simple rhythmic pattern forms the basis for Yoruba traditional percussion, and then he was allowed to handle some of the huge variety of Yoruba drums, each connected with a specific religious or social purpose, or with a deity in the Yoruba pantheon. In 1958, following Olatunji return to Nigeria, he found a job playing drums in a Radio City Music Hall dance production called “African Fantasy.” There he was ‘discovered’ by Columbia label talent administrator John Hammond, who also discovered such performers as Billie Holiday and Bruce Springsteen, eventually getting signed and releasing five albums between 1959 and 1966.

He was a favorite among the Jazz musicians as they flocked to his shows requesting to incorporate African drumming into their own albums. Jazz king pin, John Coltrane took a particular liking to Olatunji’s music, and the two became friends, eventually going as far as collaborating on the opening of Olatunji’s Center for African Culture in Harlem, an institution founded in 1965 to offer classes centered on African culture. Pror to this, they performed at the Village Gate club in 1961 with the drummer Art Blakey. The rock musician, Carlos Santana made a cover of Olatunji’s “Jin-Go-Lo-Ba” (from Drums of Passion), retitling it “Jingo.”

Throughout the course of Olatunji’s career, he played with artistes like; Cannonball Adderley, Horace Silver, and Max Roach, Stevie Wonder, Bob Marley, he worked with Grateful Dead drummer Mickey Hart and vocalist Flora Purim on the Planet Drum project. He contributed to music for films, Broadway productions and drumming workshops.

Olatunji believed so much in preserving the African culture for the new generation, he wrote a children’s book titled, Musical Instruments of Africa and established the Olatunji Center for African Culture in New York’s Harlem neighborhood which served as an important site in New York’s black culture and as a home base for school-based educational programs. An alumni of this school was the ‘Grateful dead’ drummer, Mickey Hart.

Olatunji in the later end of his life, made a living by touring and by teaching at spiritual retreats such as upstate New York’s Omega Institute as an artist-in-residence and at the Esalen Institute in California’s Big Sur area, occasionally receiving guest academic posts in Europe and Africa.

Between 1989 to 1997, Olatunji recorded three albums, including Drums of Passion: The Beat, Drums of Passion: The Invocation, and Love Drum Talk. He also made an instructional video, African Drumming.
FAMILY
Babatunde Olatunji was married to Amy Bush and they had children together.
PERSONAL LIFE AND DEATH
In early 2000, Olatunji purchased a home in Washington, D.C. And lived for a short time, along with his roommate, Professor Akinsola Akiwowo. He was assisted by Jaqui MacMillan and Chris Stewart, there, before he sold the house and moved to California.

Olatunji became scholar-in-residence at the Esalen Institute few years before his death, he  made his home at the wild Big Sur coastline.

During this time, he has been suffering severely from diabetes which was later assisted by Nora Arjuna, Leo Thompson and Leon Ryan until shortly before he died in Salinas, California

From the causes of his death diabetes, in 2003, one day before his 76th birthday. He was survived by his wife Amy, 3 children— “Omotola Olatunji, Folashade Olatunji Olusekun, and Modupe Olatunji”, 7 grandchildren, and a cousin, Akinsola Akiwowo.
ACHIEVEMENT
Micheal Babatunde Olatunji was part of Mickey Hart’s Planet Drum projects, including the album Planet Drum, which won the Grammy Award for Best World Music Album of 1991, the first year for which the award was given.

He was an inductee into the Percussive Arts Society Hall of Fame in 2001.
NET WORTH
His Net worth as at 2003 when he died has not yet been revealed.