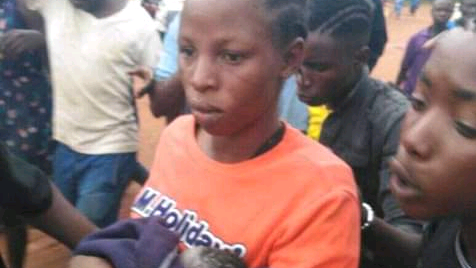 A young woman has been apprehended by the authorities after allegedly killing her newborn child In Kuru, Jos South Local Government Area of Plateau State.

TopNaija understands that the suspect, who happens to be a church chorister, murdered the baby soon after delivery and on May 11, she was captured while attempting to bury the body in a bush.

According to numerous accounts, this happens not to be the lady’s first time performing the alleged act,

A Facebook user who shared photos of the mother and the baby’s body wrapped in a shawl broke the news. “Can you just imagine, she give birth and kill the baby, happen today (11-05-2022) in trade center Kuru.” the Facebook user wrote.

In a similar event, a young woman was arrested after she was said to have killed her child because, according to her, prevented her from attending university.

The 22-year-old woman, identified as Adisa Funmilola was said to have drowned her infant because she forbade her from attending university to study law.

As reported by Vanguardngr, Adisa drowned the one-year-and-six-month-old infant in a bucket of water in her residence at Plot 22, Gowon Estate, Lagos, on Monday, May 9, and then reported herself to the police.

Upon interrogation, she blamed her actions on frustration, claiming that having a kid prevented her from pursuing her dream of becoming a lawyer as she was offered to study law at Obafemi Awolowo University, Ile-Ife.

She explained that she was pregnant by a man named Yusuf Folarin while they were both attending a JAMB lesson at City of Success in Abeokuta, Ogun State.

However, Folarin denied it and request that the pregnancy be aborted.

Related Topics:choirchoristerfeatureyoung mother
Up Next

Catholic priest condemns the murder of Deborah Yakubu, says justice must be taken