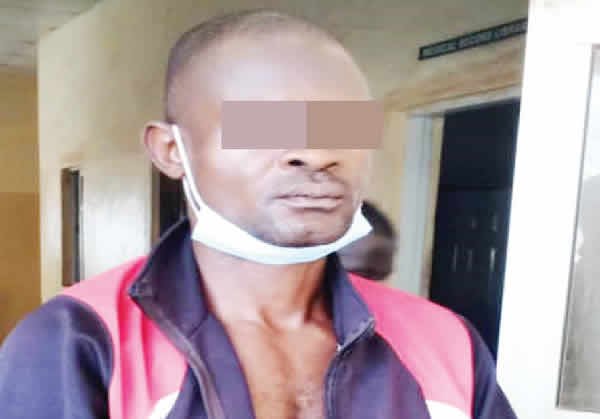 A middle-aged man identified as Patrick Odey has been arrested by the Federal Capital Territory Police Command for allegedly raping a 21-year-old salesgirl.

The victim, it was gathered, recently started working at a garden in Orozo in the Angwansarki area of Abuja and lives in one of the apartments in the garden.

Odey was said to have forcefully entered the victim’s apartment and raped her at gunpoint from 1am to 4am, and later took her to his house where he continued.

A resident, who gave his name as Kelechi, told our correspondent that the suspect had been arrested, adding that a pistol was found in one of his cooking pots when the police searched the house.

He said Odey was the leader of a cult, which had been terrorising the community in the last three years and had been getting away with it.

Kelechi said, “The suspect has been arrested. He was sleeping when the police came this morning. When his house was searched, the police saw a pistol with live ammunition inside one of his cooking pots. The guy is one of those guys that usually terrorise the community. He is the leader of a cult in the area called the Hardcore.

“The guy lived close to the bar. According to the narration the girl gave to the police, Patrick came to her apartment around 1am. She recently joined as a salesgirl. He forcefully opened the door of her room, pointed a gun at her and asked her to cooperate.

“She said she started pleading with him that she was an orphan but the guy did not listen to her. She said he raped her from 1am to 4am. At some minutes past 4am, she said the guy took her to his apartment where he continued.

“He threatened to kill her if she told anyone. The girl reported to the police and was taken to a hospital in Karish.”

Rape is a type of sexual assault usually involving sexual intercourse or other forms of sexual penetration carried out against a person without that person’s consent. The act may be carried out by physical force, coercion, abuse of authority, or against a person who is incapable of giving valid consent, such as one who is unconscious, incapacitated, has an intellectual disability, or is below the legal age of consent