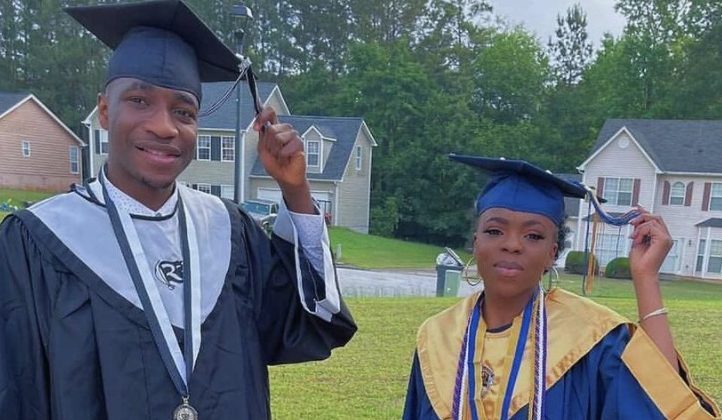 The Chairman of The National Union of Road Transport Workers (NURTW) in Lagos, MC Oluomo, has celebrated two of his children, who just graduated from high schools in the U.S. state of Georgia.

In an exciting post on Instagram on Friday, Oluomo, with full name as Musiliu Ayinde Akinsanya praised the two children for their achievements.

“I’m so grateful for the fruit of life that Allah has given them and their accomplishments. This is not the end but only the beginning for both of them.

“My children are thriving and becoming outstanding individuals and I couldn’t be any prouder of them. May Almighty Allah bless their journey through university and May he lead them to great success. I am so proud of them and I’m grateful for them”.

Oluomo, who maintains a second home in Atlanta, often shuttles between the U.S. and Nigeria.

Many of his kids are schooling in the U.S. In 2019, his twins, boy and girl, graduated from the University of Atlanta, Georgia.

Then, MC Oluomo, arguably the most popular NURTW leader nationwide, shared a photo of him and his family with Governor Brian Kemp and his wife Marty Kemp.

“Honorary invitation to me and my lovely son Ololade by the executive governor of Georgia USA Brain Kemp and his wife, Marty Kemp. ALHAMDULLIA,” MC Oluomo wrote on Instagram.

That same year, his son Ololade Abdulai Akinsanya, graduated from the Clayton County performing Arts Center in Atlanta, as a valedictorian to boot.

He went on, according to reports to win college scholarships into the university.

Related Topics:MC Oluomo
Up Next