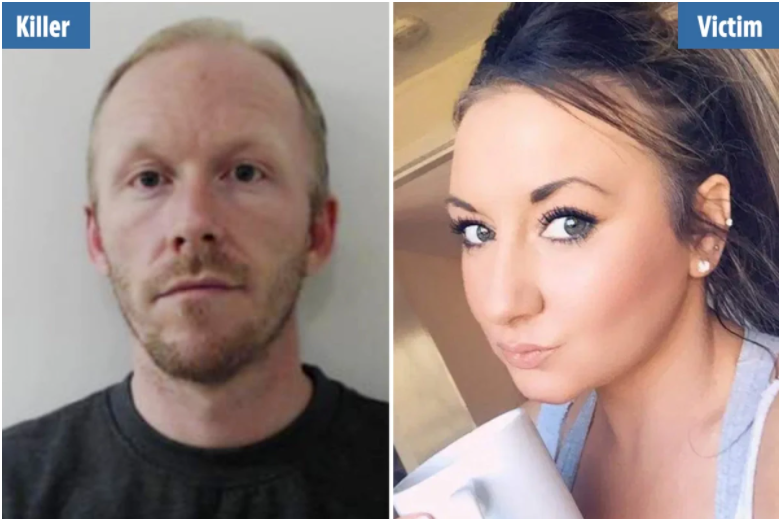 
A man who murdered his partner by strangling her before slashing her throat has been jailed for life and ordered to spend at least 18 years behind bars.

The attack was sparked by an alcohol-fuelled fight between the couple, who had been together since 2019, the court heard.

He was arrested after admitting his crime to a friend and his sister, confessing: ‘I’ve done something really bad’.

The argument between the pair escalated and Paterson strangled his girlfriend before striking her in the neck with a knife leaving a ‘gaping wound.’

Police found three washed knives in the flat and Louise’s body covered in blankets in a bedroom.

As Paterson pleaded guilty to the murder at the High Court in Glasgow, a judge slammed him for ‘betraying the love and trust’ of his partner.

“You pled guilty to the murder of Louise Aitchison, a woman whom you had been living with as your partner,” Glasgow judge Lady Stacey told Paterson

“She was only 33 years of age. She had served the community here and overseas and had much to look forward to.

“She was entitled to look to you for love and support but you betrayed her trust and by your actions you took her life.

“You know that you killed Louise and now you will have to live with that knowledge for the rest of your life.”

Defence QC Donald Findlay told the court that Paterson had had a difficult childhood and his life was blighted by alcohol.

He added: ‘The pair met by chance and through their love of dogs began a relationship.

‘He really does not have a clear recollection of how this came to pass. He has various snapshots.

‘He does accept the two of them had a considerable amount to drink, there was clearly some kind of argument which gathered momentum and got out of hand.

The court heard that on April 28, 2019, Louise phoned the police at 10.45 pm and asked them to remove Paterson from her home. He left and said he would phone to come back to collect his stuff.

Prosecutor Alex Prentice QC said: “At some point that evening Mr. Paterson murdered Louise Aitchison by compressing her neck, restricting her breathing, and striking her on the neck with a knife causing a gaping wound.”

At 1 am on April 29, Paterson turned up at his friend Adam Ford’s house and told him: “I’ve done something really bad, I’m going to go away for a very long time. My life’s over.”

When asked where Louise was, Paterson told his sister she was in the bedroom and the knife, which he had washed, was in the kitchen.

Paterson told his sister: “We had an argument and she punched me on the throat. I told her not to do that, but she hit me again on the same place.

“She was kicking me and things got ugly and then she had a knife.

“I don’t know what happened, but suddenly I was on top of her with my hands around her throat. And then it happened.”

When police entered the flat they found Louise lying dead in the bedroom, covered with a blanket. Three knives were found in the kitchen sink.

A post mortem examination found the cause of death was neck injuries. The wound to Louise’s throat measured almost eight inches and there was also a fracture to one of the bones in her neck.