Newborn baby boy found dead inside a gutter in Benue 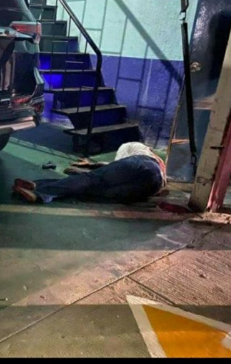 TopNaija reports that an alleged Nigerian drug dealer was shot dead during a buy-bust operation at a hotel in Bagong Ilog in Pasig City, the Phillippine National Police Drug Enforcement Group (PNP-DEG) said on Tuesday, January

The Nigerian identified as Emmanuel Christopher Chukwuma, a resident of Angeles City in Pampanga, was killed because he allegedly fought back the arresting officers, said DEG director, Bri. Gen.  Ronald Lee.

The operation was conducted in an inn along Escarpment Road in Barangay Bagong Ilog at 5:30 p.m. on Monday.

An undercover cop pretended to be an interested client and met the suspect in the hotel where he was staying.

The report said Chukwuma, upon sensing that he was dealing with police officers, grabbed the firearm of the poseur buyer. This prompted arresting police officers to shoot the suspect as an act of self-defense.

Police allegedly discovered PHP13.6 million (US$283,000) worth of meth in his possession.  Chukwuma was allegedly the leader of a gang composed of fellow Nigerians who sell drugs in different parts of Luzon.

Police said he was a partner of another Nigerian, Gabriel Onyechefula, who was killed in a police operation in Concepcion, Tarlac last December. He was able to escape the sting operation where two kilos of drugs and a machine pistol were confiscated until the same operatives managed to track him down, the PDEG said.

The deceased was also allegedly a contact of Kingsley Iwumune, who was arrested on November 5, 2020 in Brgy. Manuyo Dos, Las Pinas City.

Couple forced to have marathon sex all night while robbers record