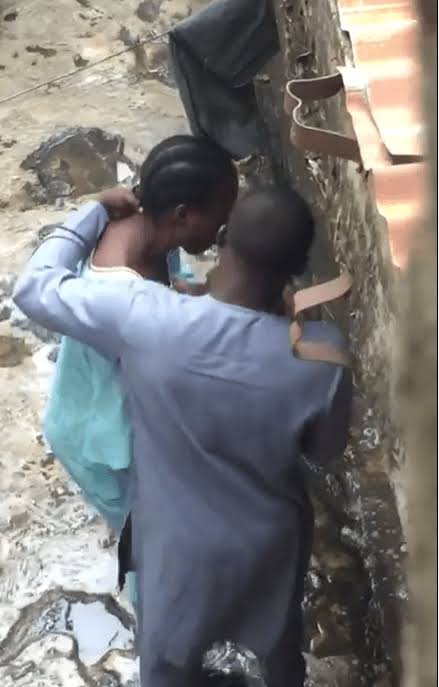 A video clip posted on Instagram had shown the man, identified as Abiodun, dragging and slapping his wife, identified as Zahidat, as she refused his attempt to forcefully brush her teeth.

The Lagos State Domestic and Sexual Violence Response Team has started investigation into the case.

A social media user who posted the video @PJ_Somie, claimed that the abuse had been ongoing for eight years and urged rights groups to come to the victim’s defense.

She wrote, “This is Zahidat, a mother of three, the man brushing her is her husband. This has been going on for over 8years now, she needs justice please she’s drained mentally, physically, and emotionally, she can’t talk any longer. Only God knows if this man has cut her tongue; this is just wickedness. This man needs to be put in his place; she really needs help please.”

It has however been gathered that the woman had psychological issues.

“Zahidat has issues with her mental health. But it is not fair that her husband is using force on her. She does not have the capacity to make right decisions for herself because she is not in control of her mental faculties.

“The woman we are talking about is a mother of three children and I really will not blame the husband for cleaning her up, but using force is out of it.”

The Baale of Ajegunle, Agege, High Chief Murisiku Balogun, said though the matter was not reported to the police, he had ordered Daniel not to beat his wife again.

He said, “They brought the matter to me. The woman has psychological issues and in fact, I learnt that where she was teaching, they sacked her over her mental illness.

“I told Daniel not to touch her again because in normal circumstances, she will not be behaving the way she is doing now.”

He noted that the woman had been taken to the Neuropsychiatric Hospital, Aro, Abeokuta, for treatment.

A psychiatrist, Dr Olugbenga Owoeye, said it was wrong to use force on people with mental challenges.

He said, “When somebody has mental issues, the person’s memory will go, their behaviour will change and they will cause pain to friends and family. But neglecting them is the worst thing we can do because that’s when they need us most. Beating such people is a crime and we don’t need to do that as they are not in their right frame of mind. This condition is known as Schizophrenia. Again, beating is not the solution.”

Reacting, the Executive Secretary of the Lagos State Domestic and Sexual Violence, Vivour-Adeniyi, said, “We heard about the case and went there and we are investigating it because even if she has mental issues, the man is not supposed to treat her in that manner. She has her rights.”