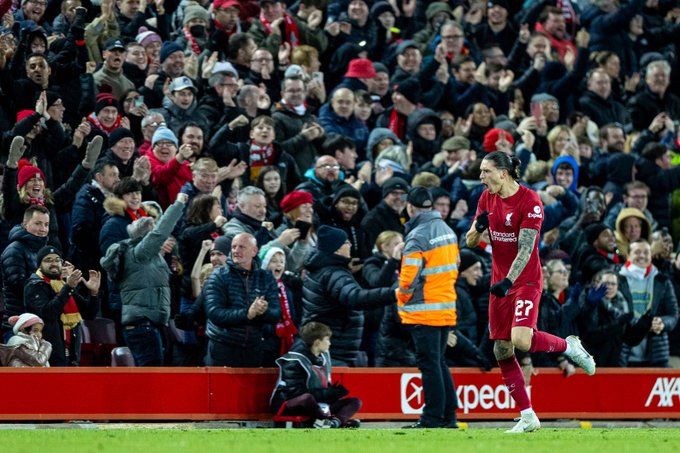 Liverpool vs. Wolves FA Cup tie is one game where VAR lent its hand to the Livarpool conspiracy with 2 key decisions within the game going the way of Liverpool despite Wolves’ efforts to put on a dominant display at Anfield.

Liverpool earned a draw with Wolves in the FA Cup third round on Saturday night thanks to two offside decisions that went in their favor.

After being humiliated by Brentford earlier in the week, Liverpool absolutely needed to turn things around as they started the FA Cup defense.

However, they didn’t quite get off to the start Jurgen Klopp would have liked as they fell behind 1-0 in the first half thanks to a terrible error by Alisson Becker.

The manager must have been debating whether to start Caoimhin Kelleher, who was sitting on the bench, as the typical cup goalie at that moment.

Moreover, the hosts gained the lead for the first time seven minutes after the restart when Cody Gakpo, making his debut, assisted Mohamed Salah in putting the ball in the back of the net.

The Egyptian was, however, offside when Gakpo delivered the ball, but Toti Gomes intercepted the first pass before it reached Salah, saving the Egyptian.

Many believed the ruling was incorrect and that Gomes would only have played the ball due of Salah’s location, despite the fact that his playing of the ball allowed the VAR authorities to make the correct judgment.

“The offside rule at the moment defies all logic. How Salah can be deemed as not offside is ludicrous.

From a Liverpool fan’s perspective, they acknowledged that there shouldn’t have been any chance the Salah goal stood no matter what considering he interfered with play while in an offside position before the goal.

“When the ball was played he was offside but because the defender headed it he then wasn’t, yet the guy only headed it BECAUSE Salah was there. I support LFC btw!”

Another commented on the Livarpool controversy adding:

“The ONLY reason he’s tried to make a “genuine” attempt at the ball is because salah is there going for the ball… in an offside position. Will never understand how they keep giving those onside.”

Wolves felt they had the game won when Hwang Hee-chan made it 2-2, which further infuriated Lopetegui and his team.

After a Wolves corner, Gomes felt he had atoned for his previous “error,” putting the ball in the back of the net from close range and ripping off his shirt in joy.

The goal was ruled out after several minutes of VAR review because one of the players was determined to be offside.

The majority of spectators were unable to determine which player was offside and at what point in the game, though.

“I’m sorry, there is absolutely nobody offside for that Wolves goal,” one fan said.

“Christ football is so corrupt. How is Liverpool’s goal onside and Wolves is offside it’s the same thing,” another fan angrily claimed.

“I’ve seen a replay but I’m struggling to see why it’s offside? If anyone can tell me I’m all ears.”

Another social media added on the controversial ruling of Wolves’ third goal, stating:

“Wolves have been laughably robbed here. Can anyone explain that offside?”

Both teams will participate in the draw on Sunday after the game, which means there will be a repeat at Molineux soon.

From the FA Cup tie, it stands to reason that the Merseyside Reds were lucky to come out with a point from it which by all standards they obviously did not deserve, a sentiment Liverpool manager, Jurgen Klopp affirms politically.

With VAR at the top end of the discussion, the tagline Livarpool will continue being the talk of the day for Liverpool’s rival fans.

Liverpool fall behind from an error at the back! pic.twitter.com/3MpjxWq6Oo

My Future Is No Longer Certain—Frank Lampard