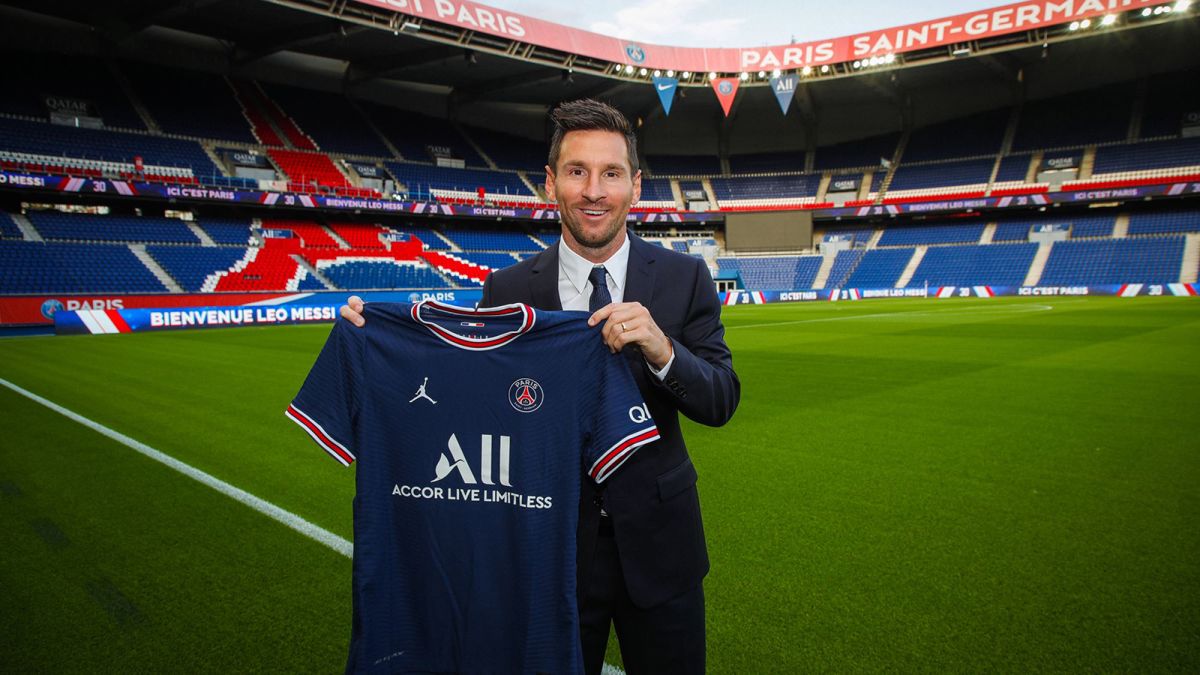 The French club confirmed this in a video on their Twitter handle on Tuesday. Before joining PSG, Messi represented Barcelona for the entirety of his 17-year professional career.

“Paris Saint-Germain is delighted to announce the signing of Leo Messi on a two-year contract with an option of a third year.

“The six-time Ballon d’Or winner is justifiably considered a legend of the game and a true inspiration for those of all ages inside and outside football.

“The signing of Leo reinforces Paris Saint-Germain’s aspirations as well as providing the club’s loyal fans with not only an exceptionally talented squad, but also moments of incredible football in the coming years,” a statement on PSG’s website read.

Messi had conceded at a tearful farewell news conference in Barcelona on Sunday that joining PSG was only a “possibility”.

Lionel Messi arrived at Paris Saint-Germain on Tuesday to complete the signing of the Argentinian superstar. The 34-year-old was accompanied by his wife and three children.

His father Jorge, who is also his representative, was also present during the signing. Asked by reporters if his son would sign for the French club, Jorge Messi said, “Yes”.

PSG have spent the last few days trying to finalise an agreement to sign Messi following his departure from Barcelona, the club he has represented for the entirety of his 17-year professional career so far.

Messi conceded at a tearful farewell news conference in Barcelona on Sunday that joining PSG was only a “possibility”.

In reality, with Abu Dhabi-owned Manchester City having ruled themselves out, PSG became the only club that could afford a deal worth 35 million euros ($41 million) a year.

Messi leaves Barcelona with 672 goals in 778 appearances, a record tally for one club. Messi won 35 trophies at the Camp Nou after joining Barca aged 13, but his last appearance was a damp squib: a 2-1 home defeat behind closed doors against Celta Vigo in May.

His trophy haul includes four Champions League and 10 La Liga titles. Messi’s arrival would make PSG even more obvious favourites to reclaim a French title they missed out on last season to Lille.

They have also signed Liverpool midfielder Georginio Wijnaldum, snatching the Dutchman from under the noses of Barcelona, and spent 60 million euros on Inter Milan right-back Achraf Hakimi, who scored on his PSG league debut at the weekend.

There is a possibility that Messi could be unveiled to supporters on Saturday, when PSG host Strasbourg and a full house of nearly 48,000 will be allowed in for the first time since the coronavirus pandemic struck 18 months ago.

Paris Saint-Germain Football Club, commonly referred to as Paris Saint-Germain, Paris SG, or simply Paris or PSG, is a professional football club based in Paris, France. They compete in Ligue 1, the top division of French football.