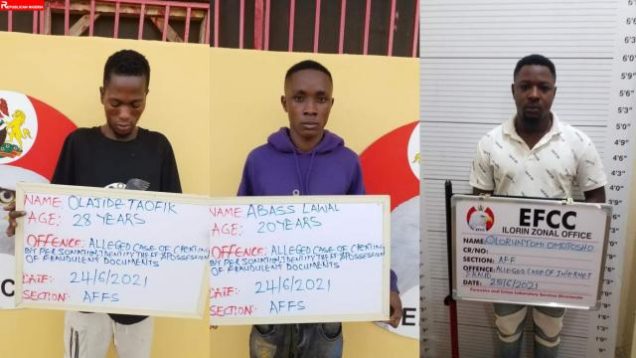 Omotosho Olorunyomi Samuel, a 21-year-old student of Ladoke Akintola University of Technology, LAUTECH, Ogbomosho and two others, Abass Lawal, a student of the Kwara State University, KWASU, Molete and one Olajide Taofeek Adegoke have been sentenced to jail over offences bordering on cybercrime.

Justice Sikiru Oyinloye of the Kwara State High Court sitting in Ilorin ruled over the offenses bordering on cybercrime.

On Thursday, August 5, 2021, the Ilorin Zonal Command of the Economic and Financial Crimes Commission, EFCC had arraigned the trio on separate two-count charge each, to which they pleaded guilty.

Following the guilty plea by the defendants, the prosecution reviewed the facts of the cases and tendered incriminating items recovered from the defendants, which were admitted in evidence by the court.

He said the court was satisfied that the prosecution had proved its cases beyond reasonable doubt.

The judge also forfeited the Mac Book Laptop and iPhone 11 Promax used as instruments of the crime to the Federal Government.

Similarly, Justice Oyinloye sentenced Abbas to one-year imprisonment each on the two counts preferred against him, which would run concurrently. He also gave option of fine of N50,000 (Fifty Thousand Naira) on each of the counts.

The judge ordered the forfeiture of his iPhone 11 Promax used as instrument of the crime to the Federal Government.

The judge, thereafter ordered the forfeiture of the manager’s cheque (bank draft) of N300, 000 (Three Hundred Thousand Naira) which the convict raised as restitution and the iPhone used to perpetrate the crime to the Federal Government.

Mum abandons her toddler to starve to death over birthday travel