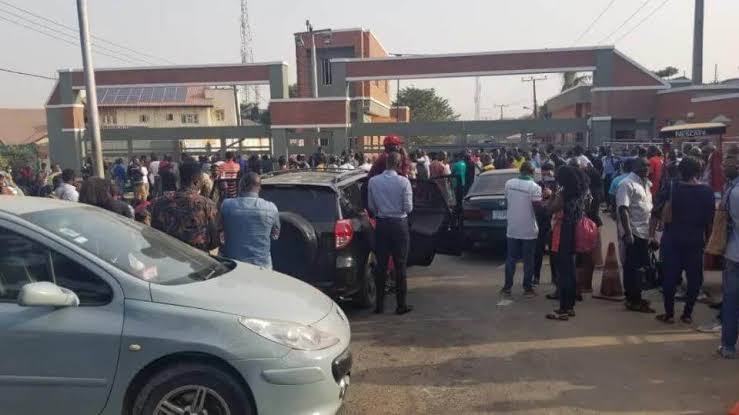 The Lagos State government has frowned at an attempt by the Shangisha Landlords Association to forcefully demolish houses and reclaim possession of lands at Magodo Estate Phase II and has vowed to prosecute the invaders.

The state government’s stance was made known in a statement issued by Moyosore Onigbanjo, the Attorney-General of Lagos State.

The Shangisha Landlords Association had reportedly invited some police officers, who were backed by suspected land grabbers, to the estate on Tuesday with the intention of demolishing it.

The land grabbers had earlier on Tuesday marked some houses in the estate with an inscription: “ID/795/88 possession taken today 21/12/2021 by court order” and subsequently brought bulldozers later that evening.

However, members of the Magodo Residents’ Association (MRA) locked up the gates leading to the exit and entry points of the estate in a bid to resist what they described as “forceful takeover”.

It took the intervention of the Lagos State government in dousing the tension and bringing the situation under control on Wednesday.

Providing the state’s official reaction to the incident, Onigbanjo stated that the case dates back to the demolition of properties at Shangisha village between 1984 and 1985, after which a Supreme Court verdict ordered the state to give the Shangisha landlords 549 plots of land as a “matter of first priority”.

According to the chief legal officer of Lagos, the verdict of the supreme court only relates to “allocation” and not “possession” of any land.

The Lagos Attorney-General said “another round of settlement was initiated in 2016” with an offer of re-allocation at the Ibeju Lekki area, but Adeyiga also rejected the proposal.

The statement read: “Subsequent to the rejection, the state government has been in dialogue with the majority of the judgment creditors from 2019 with a view to reach a concession towards implementing the judgment.

“Noteworthy also is the pending application for interlocutory injunction dated 1st December 2020 before the court of appeal in appeal no. CA/L/1005A/2018 seeking an order restraining Chief Adebayo Adeyiga and others (including their agents, servants, privies or howsoever called, particularly the police) from entering into, giving direction, taking possession or in any manner disturbing the quiet enjoyment of property owners in Magodo Residential Area Scheme.

“The Lagos state government has equally observed that the execution was carried out by unknown bailiffs as the sheriffs of the High Court of Lagos, where the judgment emanated, were not responsible for the purported execution carried out on the 21st December 2021 at Magodo.

“The purported execution is therefore contrary to Order 8 Rule 17 of the Supreme Court Rules 2014 and Section 37 of the Enforcement of Judgment and Orders Part iii of the Sherriff and Civil Process Act, LFN, 2004.

Onigbanjo said the state government will prosecute all those involved in the invasion of the estate.

“The state government is therefore dismayed by the action of Chief Adebayo Adeyiga (one of the Judgment Creditors) who misled the Nigeria Police in attempting execution of the Judgment, notwithstanding the pending appeal against the issuance of warrant of possession by the then Chief Judge of Lagos State on 16th March 2017,” he said.

“The state government enjoins the general public to remain calm, especially residents of Magodo Residential Area, while investigation into the unwarranted incident is being carried out with a view to prosecuting any person found culpable.

“The Lagos state government has high regard for the rule of law and will protect the interests of all parties.”