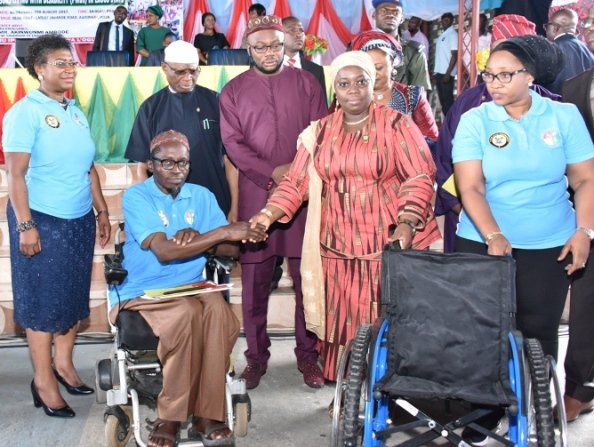 Lagos State Governor Akinwunmi Ambode on Wednesday announced that in line with the promise he made at a recent Town Hall Meeting held in Ojo, the State Government would soon distribute letters of employment to 250 persons living with disabilities who would be deployed to the State Civil Service as well as the Local Government Areas and Local Council Development Areas (LCDAs).

The Governor who also promised to run an all-inclusive government, distributed various assistive technologies, mobility aids and financial grants to 2,000 persons living with disabilities and Non-Governmental Organizations (NGOs) involved in taking care of such categories of people.

According to the Governor’s official website, he was represented by the State’s Deputy Governor, Dr Idiat Adebule at the presentation ceremony in Ikeja. She said on behalf of the governor that the development was a major testament to demonstrate in practical terms his commitment to ensure an all-inclusive government and to empower persons living with disabilities to become wealth creators and employers of labour.

To reinforce our determination to support persons living with disabilities to realise their dream, a N500million Trust Fund was established last year on the first anniversary of this government for the welfare of persons with disabilities in Lagos State. This was followed by the inauguration of a board to ensure judicious management of the Fund.

Today, we are witnessing the presentation of this Fund to the first set of beneficiaries. Our focus is to move away from the previous charitable orientation of empowerment towards a more socially and economically oriented approach of enablement that will make people living with disabilities to become wealth creators and employers of labour.

For the first phase of the programme, we are presenting vehicles, equipment, funds to enable individuals, homes and NGOs take charge of their future, start businesses and create wealth for themselves,” he said.

The Governor urged the beneficiaries to remain strong, steadfast, committed to their enterprise and make judicious use of the items and funds given to them.