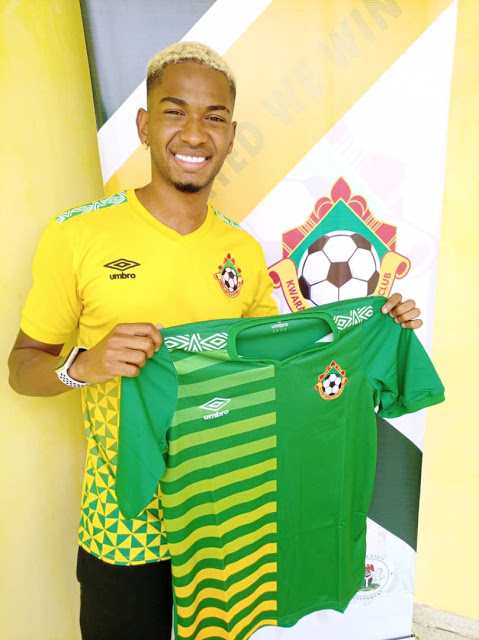 Alves, who has a Nigerian agent Peter Denise Alade, sealed the deal with the Afonja Warriors after stints at Corinthians and Pao De Acucar in Brazil and Seahorses LA in the US.

The exciting winger can also play as a midfielder and Kwara United chairman Kumbi Titiloye believes the 25-year-old will be an asset to the Afonja Warriors in the 2020/21 Nigeria Professional League season.

“Bringing Lucas down was made possible between the club and his agent. And we are happy to have him in Ilorin,” Titiloye said.

“Lucas is a wonderful footballer with vision, good passes, a wonderful final touch and he’s also good at set pieces. So, we’ve got a great talent on our hands ahead of the incoming season.”

Alves can’t wait to get going at his new club.

“I’ll give my best here. I always play for the team, and not for personal glory.”

Meanwhile, some fans are skeptical of Kwara United’s ability to pay the Brazillian’s wages, with several clubs in the domestic topflight league struggling to pay their players and staff salaries and allowances.

“How much are they going to pay him, it is better if you play for Brazilian local league than to come and play in the Nigerian league, maybe he is not a real Brazilian,” one of the fans, Matthew Owuleke, wrote on Facebook.

But Titiloye said payment of salaries and allowances was not an issue at the club.

“I can tell you confidently that he (Alves) is not the highest paid player at the club, so we won’t have any problem paying him,” he stated.

Many other fans however hailed Alves’ decision to sign for the NPFL side.

“It’s a pity this country has degenerated so much that we see nothing good in this country…but we have the habit of treating foreigners fine. So, I believe this guy will enjoy his stay in Nigeria,” Ojo Olamilekan stated on Facebook.

Adeyan Kayode added, “That guy, Alves, is boosting his career but it’s saddening we only see the negative aspects of the situation. Following his decision, he knew everything about Nigeria before his decision to come here. Bitter but true, Brazil isn’t better than Nigeria in some ways.”

“He is not even the first Brazilian to play in our league, three Brazilians were with Ifeanyi Ubah FC a few seasons ago,” Tobymac Petrus also wrote.

Kwara United Football Club plays in the top division in Nigerian football, the Nigeria Premier League after promotion in 2017 from the Nigeria National League. Their home stadium is the Kwara State Stadium.