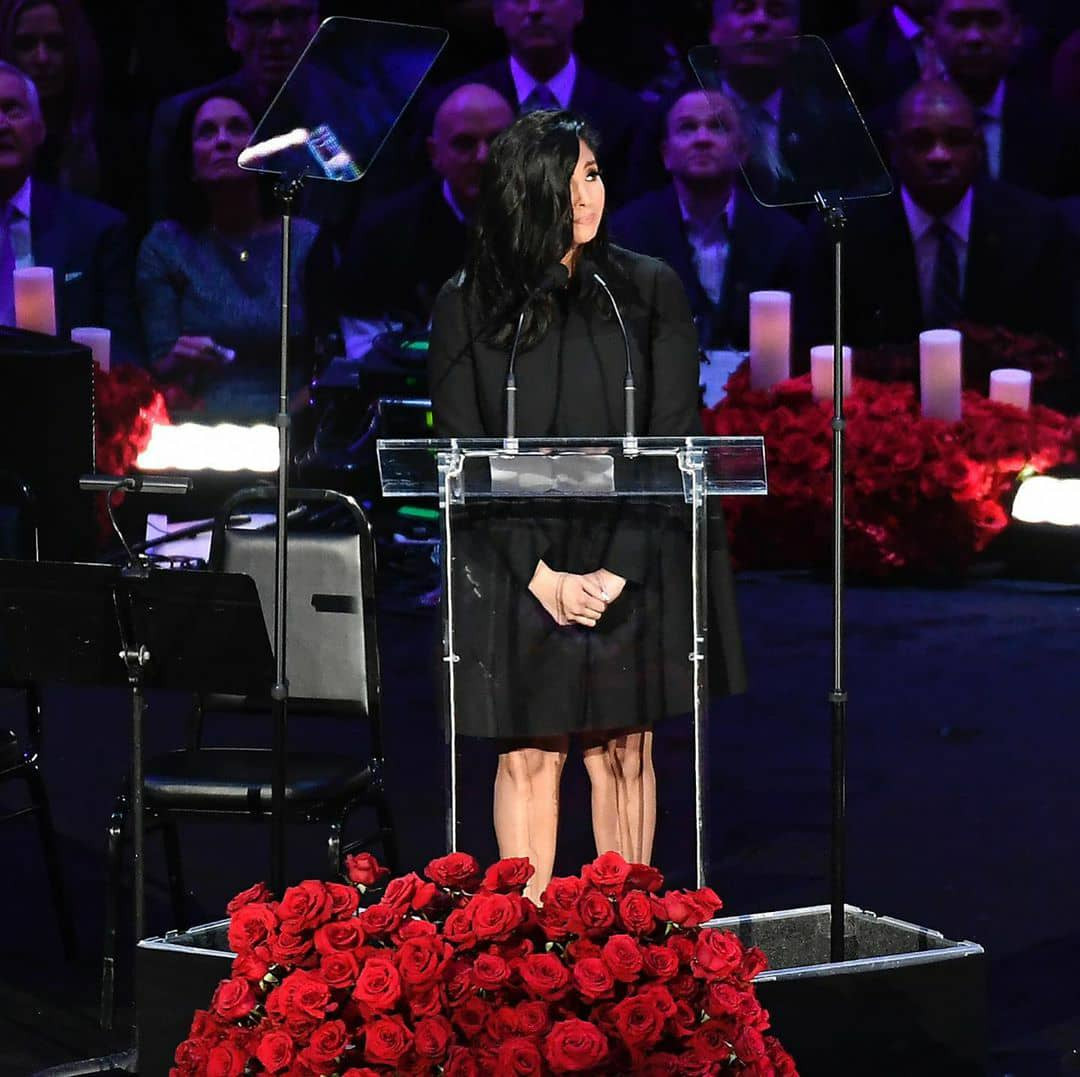 Kobe Bryant’s wife, Vanessa, on Monday paid an emotional tribute to her late husband and daughter Gianna at their memorial service.

Speaking at the Staples Center in Los Angeles, Vanessa who fought back tears started by thanking the crowd before mourning the loss of her daughter.

“Thank you so much for being here. It means so much to us, the outpouring of love and support from around the world has been so uplifting,” she said before sharing memories first of Gianna. “My baby girl, Gianna Bryant, is an amazingly sweet and gentle soul, she would kiss me every morning and every night.”

“She was daddy’s girl but I know she loved mama, and she would always show me and tell me how much she loved me,” she continued. “She was one of my very best friends.”

“Her smile took up her entire face, like mine,” she said. “Kobe always said she was me she had my fire, my personality… she was tender and loving on the inside. She had the best laugh, it was infectious, it was pure and genuine. Kobe and Gianna naturally gravitated toward each other.”

“She was a nice person, a leader, a teacher … she gave the best hugs and kisses,” she remembered, fighting back tears. ” … I miss looking at her beautiful face.”

“I won’t be able to see her go to high school with [sister] Natalia, I won’t be able to see her walk down the aisle,” she continued, breaking down in tears. “Or have a father daughter-dance with her daddy and have babies of her own. Gianna would’ve been an amazing mommy. … She probably would have been the best player in the WNBA. She would have made a huge difference in the way women are viewed in sports.”

“Now for my soulmate. Kobe was known for being a fierce competitor on the basketball court, the greatest of all time, a writer, and Oscar winner and the Black Mamba, but to me, he was Kob-Kob, my boo-boo, may bae-boo, my papi-chulo,” she said through tears.

“I was his vee-bee, his principesa, his reina, his queen mamba. I couldn’t see him as a celebrity, nor as an incredible basketball player, he was my sweet husband and the beautiful father of our children. He was mine. He was my everything.

Kobe and I have been together since I was 17 and a half years old. I was his first girlfriend, his first love, his wife, his best friend, his confidant and his protector. He was the most amazing husband. Kobe loved me more than I could ever express or put into words.”

Shee also said Kobe was a romantic person and even bought her Rachel McAdams’ blue dress from The Notebook.

She also called him the “greatest girl dad.”

“He happily did carpool, he was a doting father, he was a father that was hands-on and present,” she shared. “He shared a love of movies and the break-down of films with Natalia. He loves your typical tear-jerkers, Steel Magnolias, Little Women … he had a tender heart.”

“I want my daughters to remember the amazing husband and father he was,” she said. “… He also liked working on projects to improve people’s lives.”

Vanessa broke down in tears when she talked about Kobe and Gianna dying together.

“God knew they couldn’t be on this earth without each other,” she said. “He had to bring them home to him together. Babe, you take care of our Gigi. I got Natalia, Bianka and Capri. We’re still the best team. We love and miss you boo-boo and Gigi. May you both rest in peace and have fun in heaven. Until we meet again, we love and miss you forever and always.”

The NBA legend and his 13-year-old daughter Gianna along with seven other victims died after a tragic helicopter crash in Calabasas, California.