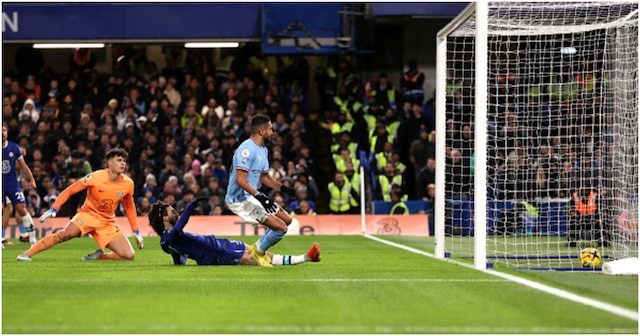 At a time when Premier League titles can be won over the smallest of margins, certain blunders such as the one made by Chelsea’s Kepa Arrizabalaga may come back to bite Arsenal’s title hopes in the long run, and for Glenn Hoddle, it was a momentary lack of concentration that determined the score line.

The defeat of Chelsea to Manchester City on Tuesday night has been attributed to Kepa Arrizabalaga by former Premier League managers Glenn Hoddle and Shay Given, as well as by former Newcastle United goalkeepers.

At Stamford Bridge, Pep Guardiola’s team overcame the Blues 1-0 to cut the lead between themselves and Arsenal in the title race.

With an important win, City closed the gap over Arsenal at the top of the league to just five points.

After converting a cross from Jack Grealish, Riyad Mahrez scored the game’s lone goal. The two substitutes worked together.

Hoddle and Shay Given have the same opinion on Kepa’s lack of effort to prevent the ball from reaching Mahrez. They think the player could have at least gotten a hand on the ball because it was so close to him.

“I think the goalkeeper really should have put his hand and get that ball…Why he hasn’t put his hand to get that ball I do not know but from City’s point of view, a terrific goal, really good goal,” Glenn Hoddle said on Premier League Productions.

For former goalkeeper, Shay Given, he noted:

“I think it was a lack of concentration. For me he got to catch the ball. It was just a couple of yards away even if he couldn’t catch it. I mean, parried it out of danger, I don’t know if he just lost concentration for a second”

We Aren’t Focusing On the Premier League Table—John Stones