Kanye Is All Grown Up
Advertisement 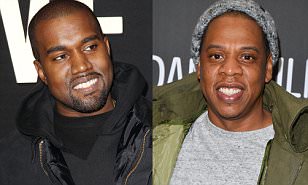 I just had to get that out.

That said, I think he lacks home training and has as much maturity as  my 8-year-old cousin.

But it in an unprecedented show of maturity, the 40-year-old rapper has allegedly reached out to Jay Z in hopes of finally ending their squabble. According to a source, Kanye asked for a face-to-face with Jay Z to hash out the beef that was ignited when Kanye West went off on Jay Z in an epic rant during a concert in November.

*teary-eyed* Isn’t our favourite rapper all grown up? *sniffs*

You’d recall that the feud between both rappers started when Kanye went onstage and called out Jay, Beyonce and even Blue Ivy.

Apparently, he didn’t know that Baba Ibeji had just come down from Ori-oke and the anointing was still strong.

The Fade rapper had a mental health breakdown shortly afterwards and was hospitalized.

The duo, however, seem to be reconciling and on the verge of working out their Tidal pecuniary disputes.

Adolf Hitler Was Still Alive In The 50’s, Lived In Argentina

Marriage Tips: Facts You Need To Know Before You Get Married