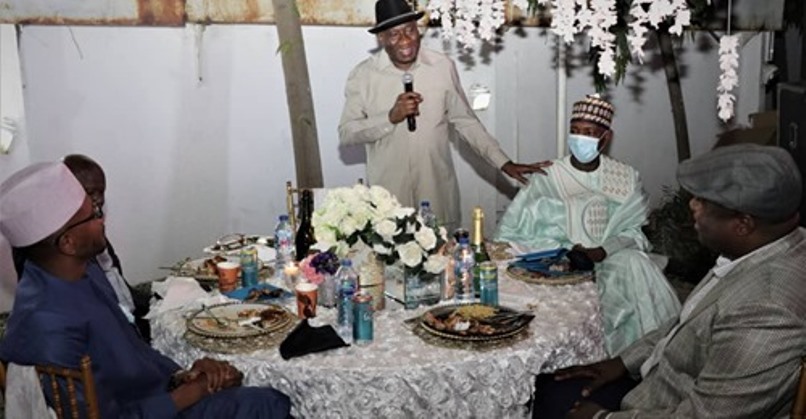 Nigeria’s former President, Goodluck Ebele Jonathan is hosting a three-day brainstorming session with 15 main Gambian political party leaders in Abuja towards a consensus on making a new constitution for the nation.

The session is with the support of the leadership of the International Institute for Democracy and Electoral Assistance.

This was included in a statement tagged, “Former President Jonathan hosts leaders of Gambian political parties in Abuja over the new constitution,” made accessible by his media aide, Ikechukwu Eze, in Abuja.

The statement partly read, “In continuation of his effort to assist with facilitating a conversation towards a consensus on the making of a new constitution for The Gambia, former President Goodluck Ebele Jonathan is hosting a three-day brainstorming session with leaders of the country’s main political parties in Abuja.

“Dr. Jonathan has been supporting the country’s ongoing constitutional review process to forge a workable national consensus since December 2020.

“The session is to afford Dr. Jonathan and the party leaders in attendance an opportunity to undertake a collective review of the progress that has been registered since the inter-party dialogue began in December 2020, with some specific recommendations carried forward to January 2021.”

Goodluck Ebele Azikiwe Jonathan GCFR, GCON was born on 20 November 1957 in Ogbia to a Christian family of canoe makers, from the Ijaw minority ethnic group in Bayelsa state.

He received a bachelor degree in zoology (second-class honours), a master’s degree in hydrobiology and fisheries biology; and a doctorate in zoology from the University of Port Harcourt.

Before his entry into politics in 1998, he worked as an education inspector, a lecturer and an environmental-protection officer.

Jonathan is a Nigerian politician who served as the President of Nigeria from 2010 to 2015. He lost the 2015 presidential election to former military head of state General Muhammadu Buhari, making the first time in the history of Nigeria that an incumbent president lost re-election and conceded defeat.

Prior to that, he served as Vice President of Nigeria from 2007 to 2010 under the administration of Umaru Musa Yar’Adua; and in oil-rich Bayelsa State as Governor of Bayelsa State from 2005 to 2007.

Since leaving office, Jonathan has continued to defend his administration. In 2019, he was appointed as the honorary Special Adviser to the Bayelsa Education Trust Fund Board.

In July 2020, Jonathan was appointed Special Envoy of the Economic Community of West African States (ECOWAS); to lead mediation talks during the 2020 Malian protests.

How we traced ₦26m to Fani-Kayode, EFCC reveals in court