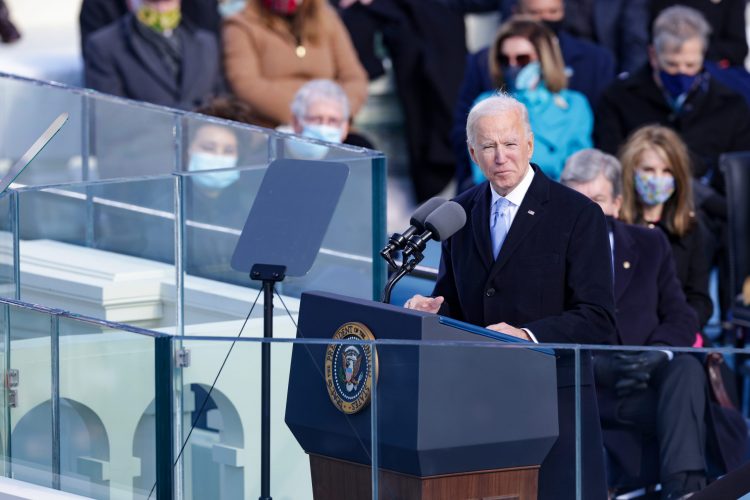 The United States President, Joe Biden has called on Americans to unite to fight the foes the country is facing, TopNaija reports.

The many foes, he said are anger, resentment and hatred, extremism, lawlessness, violence, disease, joblessness and hopelessness.

Biden, after his inauguration as 46th president of US, offered a forewarning, describing the nation as weathering a “winter of peril” amid a generational pandemic and other ailments.

“We’ll press forward with speed and urgency,” he said. “We have much to do in this winter of peril and significant opportunities.”

Biden said the predicaments currently facing the nation were historic, and said few Americans “have found a time more challenging than the time we are in now.”

According to him, coronavirus “silently stalks the country” and noted more lives had been lost to the disease than were lost in World War I.

He added: “Today, on this January day, my whole soul is in this: Bringing America together, uniting our people, uniting our nation.”

“To overcome these challenges, to restore the soul and secure the future of America requires so much more than words and requires the most elusive of all things in a democracy, unity,” Biden said.

“Uniting to fight the foes we face. Anger, resentment and hatred, extremism, lawlessness, violence, disease, joblessness and hopelessness. With unity we can do great things, important things,” he added.

Biden stated that “For without unity, there is no peace, only bitterness and fury. No progress, only exhausting outrage. No nation, only a state of chaos. This is our historic moment of crisis and challenge, and unity is the path forward. “Hear one another. See one another. Show respect to one another.”He discouraged against the culture of “total war” in policy-making and the manipulation of facts.

Also, former California senator Kamala Harris was sworn in as vice president of the United States on Wednesday, the first woman ever to hold the post.

Harris, 56, took the oath of office from Supreme Court Justice Sonia Sotomayor in a ceremony at the US Capitol.

She is the first Black woman and the first woman of South Asian descent to become US vice president.

Donald Trump left Washington three hours before Biden’s swearing-in, the first American president to skip the inauguration of his successor in more than 150 years.

The inauguration comes exactly two weeks after Trump supporters stormed the Capitol in a bid to disrupt the certification by Congress of Biden’s November election victory.

Among those attending the ceremony are former presidents Barack Obama, George W. Bush, and Bill Clinton.

Vice President Mike Pence was also present after skipping a departure ceremony for Trump at nearby Joint Base Andrews earlier in the day.

Related Topics:featureJoe BidenKamala Harris
Up Next