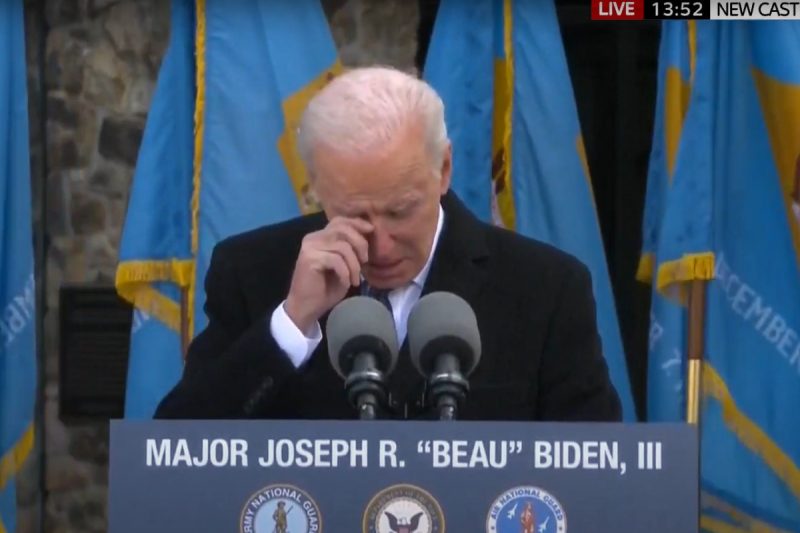 The President-elect of the United States of America, Joe Biden broke down in tears on Tuesday as he said goodbye to the state of Delaware before the journey to Washington for his inauguration.

Beau was Biden’s late son. He was a US Army veteran, lawyer and aspiring politician killed by a brain tumour in 2015 aged just 46.

Initially speaking to the crowd, Biden thanked his supporters for making him president-elect.

“It’s kind of emotional for me,” he said. “Look, you were with me my whole career, through the good times and the bad.”

However, tears began to stream down the president-elect’s cheeks as he spoke of the late son.

Biden said: ‘Excuse the emotion, but when I die, Delaware will be written on my heart. I am proud, proud, proud, proud to be a son of Delaware, and I am even more proud to be standing here doing this for Major Beau Biden. Ladies and gentlemen, I only have one regret – that he’s not here.

‘Because he should be here. We should be introducing him as president.’

His voice cracking, Biden continued: ‘But, we have great opportunities. Delaware’s taught us that anything’s possible in this country, so may God bless you all, and may God bless our troops.’

Meanwhile, President Donald Trump also delivered Joe Biden one more snub Tuesday, forcing him to charter his own plane to fly from Delaware to Washington D.C. instead of authorizing an Air Force jet.

The president-elect flew the short hop from his home state, after a tear-stained speech eulogizing his dead son Beau, on a private Boeing 737 – then as he landed at Joint Base Andrews taxied past an idle Air Force Boeing 757 on the tarmac.

The snub was the latest in Trump’s defiant refusal to acknowledge his successor. In contrast the Obama administration sent an Air Force plane to New York for the Trumps in January 2017.