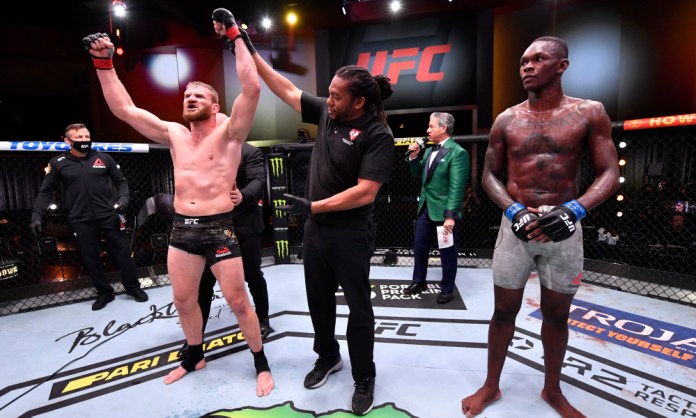 Though Nigeria-born Israel Adesanya remains the UFC middleweight champion of the world, early today, he lost his bid for the light heavyweight crown to Polish man Jan Blachowicz, to suffer the first loss of his career.

VDO.AI
The light heavyweight title bout was the UFC 259 main event, and it aired on pay-per-view following prelims on ESPN and early prelims on ESPN+.

Adesanya, now also a New Zealander has believed all along he could be the greatest in the sport, aiming to become the fifth fighter in UFC history to become a two-weight champion simultaneously.

The Nigerian born fighter had steppre into the octagon against Jan Blachowicz, the light-heavyweight title-holder, who is bigger, more experienced, and older, but Adesanya had said none of these qualities trouble him.

Adesanya has made a career of trashing reputations, his speed, power, and movement combining to build an unbeaten 20-0 record.

If the “Stylebender” won, he would have joined Conor McGregor, Daniel Cormier, Amanda Nunes and Henry Cejudo as one of just five fighters in UFC history to hold titles in two divisions simultaneously.

With the win, Blachowicz continues his winning ways. Not only did Blachowicz pick up his first career UFC title defense, but he also extended his winning streak to five. In his most recent 10 outings, Blachowicz has gone 9-1 with victories over Adesanya, Dominick Reyes, Corey Anderson, Ronaldo Souza, Luke Rockhold, and more.

As for Adesanya, the loss is the first of his professional MMA career. Though he lost his UFC light heavyweight title challenge, Adesanya remains the UFC middleweight champion, a division he has twice defended his title in.