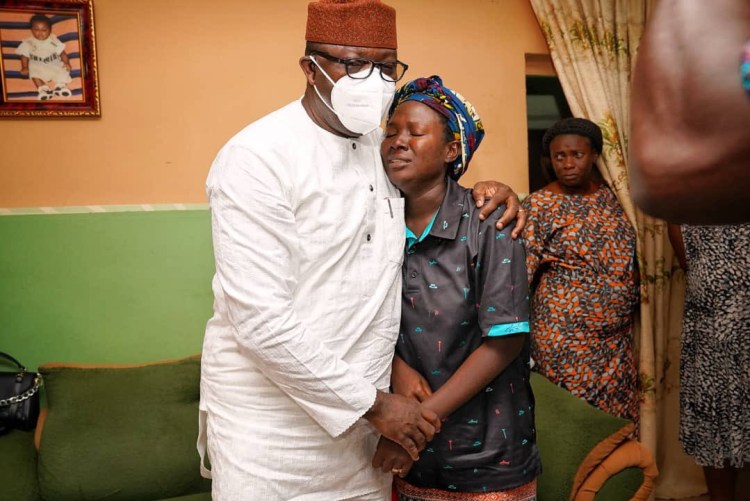 On Tuesday, it was a sight of deep pain and sorrow as Mrs. Omolola Olawunmi, widow of Flight Sergeant Olasunkanmi Olawunmi, who died in the Nigerian Air Force plane crash on Sunday, recalled her last conversation with her husband.

According to the Minister of Aviation, the Beechcraft KingAir B350i (NAF 201) craft crashed due to an engine malfunction. Late Olasunkanmi Olawunmi, an indigene of Ogotun-Ekiti died alongside six others in the crash.

Omolola Omowunmi, who spoke when the Ekiti State Governor, Dr. Kayode Fayemi, visited the Ado Ekiti residence of the late military personnel, who hailed from Ogotun Ekiti, said she was still waiting for her husband’s call.

She said, “When I got home on Sunday, I called him that ‘dear, we have returned from church,’ he said ‘we are taking off now, I would call you back when we land.’ I am still waiting for that call.”

Olawunmi was among the seven personnel of the Nigerian Air Force that died when the military jet crashed in the Federal Capital Territory.

Fayemi, who consoled the widow, led the prayer for protection for the family of the late Olawunmi.

Fayemi said, “We do not want this, we did not pray for this, it is not our desire, it is not our expectation. If this is your wish Lord, we can only pray that you give your children the courage, the fortitude to bear this unfortunate development.

“We are human, we are flesh, so we are not going to see it the way you see it Lord; we are going to be pained and we are pained..

The governor disclosed later on Twitter that he spent the morning with Mrs Omolola Olawunmi, wife of the late officer. He also prayed that the soul of the departed, rest in peace.

Spent this morning with Mrs Omolola Olawunmi, wife of our son from Ogotun Ekiti, Flight Sergeant Olasunkanmi Olawunmi who died in the Air Force plane crash on Sunday. May the soul of the dear departed rest in peace.
JKF pic.twitter.com/2UJDxOTpxJ