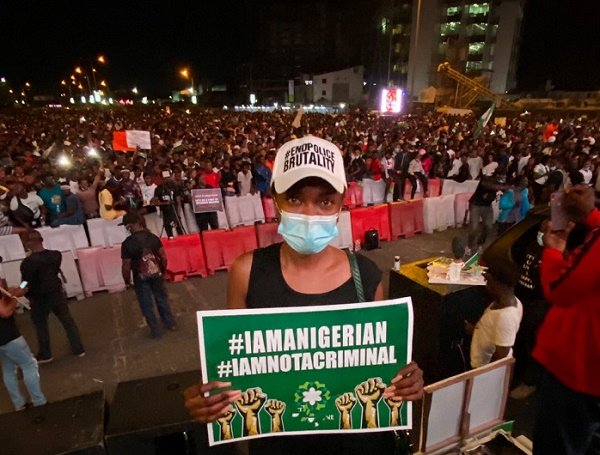 
Popular Nigerian actress and film director, Omoni Oboli has narrated her battle with trauma after the shooting of unarmed #EndSARS protesters by soldiers in Lagos state.

The shooting of the protesters, which occurred at the Lekki toll gate axis of the state on October 20, has continued to attract condemnations from several quarters.

In a lengthy Instagram post on Tuesday, the award-winning actress recounted how the incident left her unsettled for days.

Oboli said the shooting made her ill psychologically and emotionally, adding that she “literally felt l was dying many times.”

The movie star also said she had resolved to embark on a “healing process” after days of battling with the ugly memories to avoid worsening her health.

“Healing does not mean the pain stops existing. It means the pain doesn’t control your life anymore,” she wrote, quoting a line from ‘The Stars Are Ageless’, her book.

“It’s been one week and I’ve been through it all. I’ve been emotionally, psychologically, physically, so violently ill to the point that I’ve puked out bile.

“I’ve barely slept in this one week and I’m sure many have felt it or are feeling this way but it’s time for healing.

“I’ve had to make a conscious decision to start the healing process because staying in this state just triggers more panic and anxiety attacks (I literally felt like I was dying many times).”

She enjoined others battling similar situation to embark on a healing process by reaching out to people for help.

“So I’m starting my healing process and I advice you all to because we are useless to humanity in this state. What we all experienced is very insane and most of us will suffer from Post-traumatic Stress Disorder (PTSD),” she added.

Oboli also urged those who lost their loved ones as well properties amid the unrests trailing the protests to brace up.

She went on to appreciate friends and well-wishers who checked on her during the period while also apologising to those who attempted to reach her but got no response.

“To all who lost property and livelihood to looters. God sees. He will restore 7 fold! Just watch and see him give you double for your trouble!” she added.

There have been conflicting reports on the actual casualties since the shooting took place.