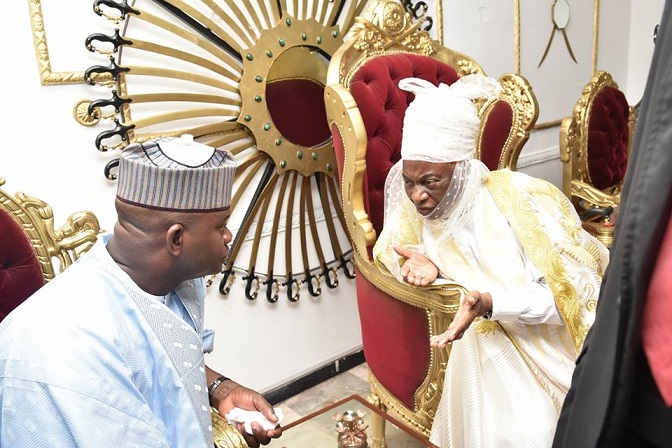 Abdul Rahman Ado Ibrahim, ohinoyi of Ebiraland, has complained that Yahaya Bello, governor of Kogi, is being misled by money and “extremely wrong people around him”.

Ibrahim said Bello has lost the goodwill of the people and it would be difficult to convince them to vote him for a second term in office.

Speaking in a recent chat with Daily Trust, the traditional ruler said he supported Bello in 2015 because his assessment of the governor was positive, but “he is a different thing today”.

According to him, Bello does not listen to the counsel of traditional leaders “but he gave more time to those who idolize him”.

“So there is this issue of the boy not knowing what he should do because he has extremely wrong people around him. Bello is a nice young man and highly intelligent; that is why I recommended him at that time,” Ibrahim said.

“People said I was supporting Bello because he is my cousin. Well, partly, that could be one reason. Two, he had money to do it, and that money is what has misled him so far.

“A good person should always put money aside and put reality in the front. Money should just be a palliative anytime you need it.

“The governor did not allow traditional rulers to advise him. I haven’t sat with him to advise him on issues that are required to stabilise the peace of the people. I think I should advise him on policy issues, but he gave more time to those who idolize him. He is enjoying that.”

Asked to comment on the non-payment of workers’ salaries in the state, the ohinoyi said he cannot say much.

“For the assessment, I can’t say much, I can only talk about what people are saying and what I read in the papers,” he said.

“I don’t know how he does it. If people say he didn’t pay salaries, I cannot say why he didn’t do that. As far as I am concerned, he is paying salaries. I cannot comment on whatever they say he is doing.”

Ibrahim said despite the not so good comments about Bello, he does not want the relationship between them smeared.

He said he prays for, and is working to see the governor’s re-election, even though the people of Ebira “don’t want to hear me say that”.

“Whatever I want to say is that my human relation with him should not be put to shame. I introduced him and favoured him in place of others. I did my own assessment of him at that time. He is a different thing today, as far as I’m concerned,” he said.

“His relationship with Ebira people is a bit dented because he has more relationship with the Igala people, who are leading him in government. And they are the people I am now talking to so that they will have a change of mind and vote him back.

“Honestly, they have the votes. All I am trying to do is to get them to give him another term, after that if they don’t need to see his face anymore they can seal his fate. Whatever term they want to give, I’m prepared to go to any length.

“I’m really trying to get my people to support his second term, but I know that they don’t want to hear me say that.”