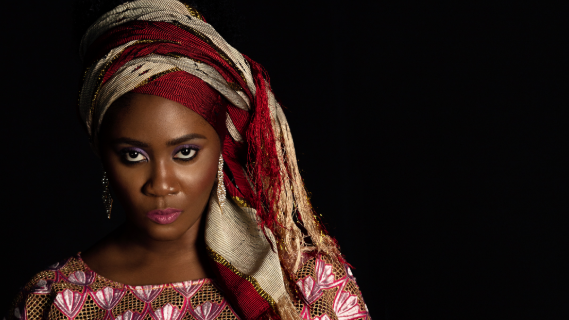 In 2018, Nigerian actor and singer Toni Tones made an indelible mark in Nollywood with her critically acclaimed performance in box-office smash, ‘King of Boys.’  2019 is definitely THE YEAR of Toni Tones, as she shows no signs of slowing down.

In an in-depth interview with Aura Magazine, the triple-threat talent gives readers a rare glimpse into her artistry, living life purposefully, as well as her hopes, dreams, and ambitions.

Toni has completely shattered the proverbial box and is blazing her own trail. Watch out world! This icon in the making is here to stay.

The movie, directed by Kemi Adetiba, featured Tones as a younger Eniola, a character played by Sobowale.

In a cover-interview with Aura Magazine, Tones said she had to gain weight, lose her voice on purpose to attain the husky tone of Sobowale’s voice.

Tones revealed that she did not audition for the role she played in the movie, saying she actually tried for the part of Kemi Salami, Sobowale’s on-screen daughter, which was played by Adesua Etomi-Wellington.

She said: “Playing the ‘Young Eniola Salami’ (Young Sola Sobowale) in ‘King of Boys’ was quite challenging for me. It’s easier to create a character from scratch; you get to make it your own. But when you’re playing the younger version of someone, there’s already a blueprint set out for you that you have to follow. You have to move, look and sound like the person.

“You have to convince that you really are the younger version of who you are playing. I made the decision to put on weight for the role for two reasons; I knew it would help me look more like Sola Sobowale. I knew it would make people see less of ‘Toni Tones’ because they are used to me being slim and I needed them to as little of Toni Tones in this character as possible.

“So putting on weight was one of the steps I took. Not exactly the same size as Aunty Sola, but a size that makes her more easily recognisable and more easily conceivable that I could have morphed into her present size at her current age.

“I also strained and lost my voice on purpose so I could have the same husky tone to my voice that Aunty Sola has. A lot of people thought my voice was digitized to make me sound like her, but it was wasn’t, I just trained my voice to sound like hers.”

Tones said she spent over two months “doing nothing else but studying Sola Sobowale”.

“I refused other work so I wouldn’t have to go out of character and stay focused,” she added.

Tones’ portrayal of the young Eniola has earned her critical acclaim, and she admitted that the movie has opened doors for her.

The actor, who was first known as a photographer, said she hopes to break into Hollywood in five years time.

See her shoot below.