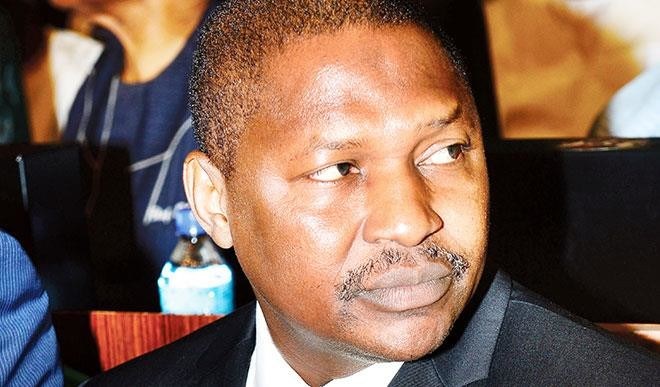 The United States says it will only deal with Nigeria on a government-to-government basis for the restitution of $500 million Abacha Loot, TheCable reports.

Officials of the US department of justice (also known as DoJ), according to the sources, told President Muhammadu Buhari pointblank during his visit to the US that they would not deal with any third party in the restitution of the funds.

Abubakar Malami, the attorney-general of the federation, had attempted to engage private lawyers who were going to take a cut as “legal fees” — even though they did not play any role in the recovery of the stolen funds traced to the former military head of state, Sani Abacha, who ruled Nigeria from 1993 to 1998.

The recoveries were made in 2014 under President Goodluck Jonathan and domiciled with the US government — and all the lawyers involved had been paid 4% of the funds as their fees.

The funds were to be returned to Nigeria on the condition that the federal government would sign an MoU to avoid the mismanagement associated with recoveries under President Olusegun Obasanjo.

In 2016, however, Malami went ahead to appoint two Nigerian lawyers again — in a pattern very similar to the $321 million Abacha Loot recovered from Luxembourg also in 2014 for which the lawyers he hurriedly engaged were to be paid almost $17 million for doing nothing.

In the Switzerland case, Malami appointed Oladipo Okpeseyi, a senior advocate, and Temitope Isaac Adebayo, in 2016 apparently to replicate the job already done.

Incidentally, Okpeseyi and Adebayo were lawyers to the Congress for Progressive Change (CPC), the APC legacy party of which Malami was the legal adviser.

He also proposed to use the same lawyers in the US case, but the department of justice has consistently refused to entertain them, thereby stalling the return of the money to Nigeria.

America has now promised to return the $500 million but without the involvement of the appointed intermediaries.

The Nigerian government has also undertaken to spend the money on social protection programmes.

According to documents seen by the press, the DoJ initiated a legal action in November 2013 on the request of then attorney-general, Mohammed Bello Adoke, to confiscate assets worth $500 million traced to the Abacha family in France, Jersey and the UK.

Although the funds were not in the US, they fell foul of America’s money laundering laws having passed through the country in one form or the other.

Following a civil forfeiture complaint, the DoJ froze $280 million of Abacha Loot in Jersey, $140 million in France and $40 million in England.

Under US rules, any claimants to the asset were required to file a claim no later than 35 days after direct notice was sent to them or 60 days after the publication of notice.

Neither Mohammed Abacha, son of the late dictator, nor his companies filed any such complaint within the period until it expired.

Adoke had instituted a criminal case against the Abachas in Nigeria which eventually forced the family to enter into a settlement with the federal government to return the looted funds.

On June 2, 2014, the DoJ requested the US district court for the District of Columbia to enter into a default judgment against the Abachas in the suit, United States of America v. All Assets Held in Account Number 80020796 in the Name of Doraville Properties Corporation at Deutsche Bank International Limited in Jersey, Channel Islands and All Interest, Benefits of Assets Traceable Thereto.

However, some lawyers appeared on the scene claiming to have been engaged by Nigeria to handle the recovery of the funds.

They showed a letter of authority signed by Akin Olujinmi, Nigeria’s attorney-general between 2003 and 2005 — even though the Nigerian government had engaged Enrico Monfrini, a Swiss lawyer, to do the same job in 1999.

The lawyers — Jude Chukwuma Ezeala, Kenneth A. Nnaka, Godson Nnaka and Charles Lion Agwumezie — were also said not to have done anything in 10 years since Olujinmi authorised them.

Their involvement was opposed by Adoke, who wrote a letter dated May 26, 2014 to the Asset Forfeiture Money Laundering Section, Criminal Division, U.S. Department of Justice, to state that the lawyers were not authorised.

Thereafter, specifically on June 27, 2014, the DoJ requested that US district court for the District of Columbia to strike out the complaint filed by the four lawyers.

As a result, the DoJ got a motion in the US district court for DC on July 3, 2014 — finally allowing for the recovery of the funds.

In all, well over $1 billion was traced to Abacha in the UK, Luxembourg and Liechtenstein as at 2012 when Jonathan was president.

The $321 million recovered from Luxembourg in 2014 under President Goodluck Jonathan was domiciled with the attorney-general of Switzerland pending the signing of an MoU to avoid the mismanagement associated with previous recoveries.

Pio Wennubst, assistant director-general and head, Global Cooperation Department, Swiss Agency for Development and Cooperation, told NAN recently that the money was returned to Nigeria with a $1.5 million interest, bringing it to a total of $322.5 million.

The house of representatives has set up a probe panel to investigate the suspected sleaze.

The recovery was done by Enrico Monfrini, a Swiss lawyer, who vehemently denied syndicated media articles that he was asking for another 20% of the recovered funds for the final leg of the restitution to Nigeria.

In an email to the press, however, Monfrini had explained that there is no truth in the allegation.

“I never had the audacity to claim for additional fees. This figure of 20% is simply invented. I didn’t reject any proposal made by Mr. Malami since my fees were already paid a long time before Mr. Malami’s appointment as attorney general,” he said, adding that “any allegations against that would just be a lie.”

“The repatriation of the $321 million was not completed by me. It’s a matter which is normally dealt between governments and which doesn’t entail the engagement of lawyers,” he added.

VIDEO: You’ll blame yourself if the cabals mess up this government – Bakare warns Buhari