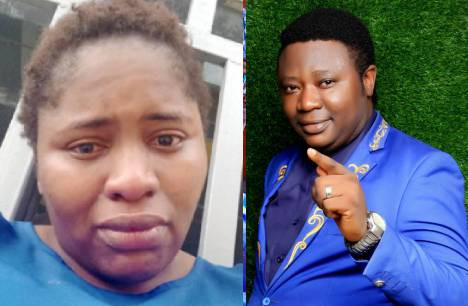 Blessing Joseph is the estranged wife to a man called Pastor Precious Iginla. who is a senior pastor at the prophetic fire Embassy International Church Port Harcourt.

He is also the younger brother to a popular Abuja-based Pastor, Joseph Iginla. Joshua Iginla is a Nigerian pastor, televangelist, and prosperity gospel preacher regarded by some as a prophet. He is the founder and senior pastor of the Champions Royal Assembly, a megachurch that meets in an 80,000 seat auditorium in Kubwa, Abuja, Nigeria.

According to her, since she got married to this man in 2014, from the first week of the marriage, she became subjected to emotional abuse and public disgrace from these two brothers.

She is on the show today because she has not been allowed to see her children for almost 1 year since she was kicked out of her matrimonial home by her husband.

Now, she’s presently in court asking for a divorce and for some kind of custody or access to her children and she says she has been frustrated from getting any type of justice.

Apparently, women being separated from their children is one special form of Nigerian epidemic.

Watch her tell her side of this story in the video below:

Prior to now, the mother of two alleged that her husband doesn’t take care of her and the kids, he beats her, refused to allow her work, starves her and the kids and sometimes locks her outside their house.

She further revealed that she has been enduring all these because of her kids but no longer wants to stay in the marriage. The lady went on to beg NGOs to help her get out of her marriage, while also pointing out that she can’t take care of the upkeep of her kids.

However, Blessing later shared a new video of herself and her husband. She revealed that he has apologized, they’ve resolved their issue and decided to make their marriage work.

Related Topics:featureThe Iginla brothers
Up Next