How Pakistani plane crashed with over 100 passengers
Advertisement

No money to import food amid COVID-19, Buhari insists 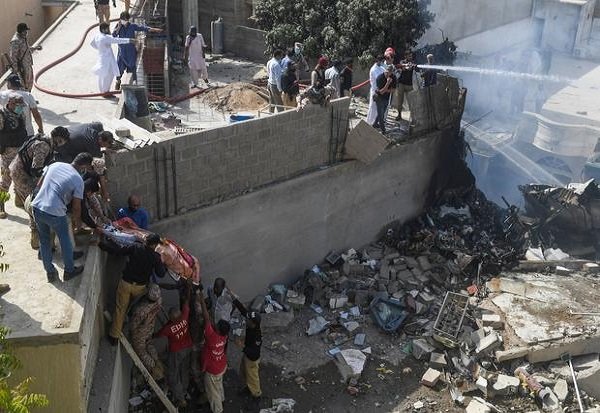 Earlier today, a Pakistan International Airline (PIA) aircraft crashed in a residential area just before it was scheduled to land at Karachi Airport, TopNaija reports.

The aircraft coming from Lahore, a city in Pakistan, was reportedly carrying over 100 passengers when the incident happened, according to 24 News Digital.

Model Colony, the residential area where the aircraft crashed, is said to be densely populated.

The broadcaster quoted sources as saying the pilots of the aircraft, an Airbus 320, reported some technical difficulty after which the plane went off radar and crashed.

Rescue teams of the Civil Aviation Authority (CAA) have since been dispatched to the crash site.

Although rescuers have reported damage to a number of houses, there is no official overall death toll figure from the incident yet. Pictures also show smoke billowing from the crash site.