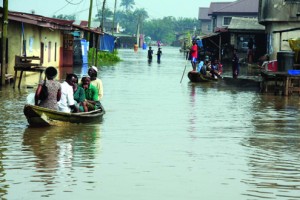 An eight-year-old girl, Miss Oluebube Nwanedo was Friday evening drowned by flood while trying to rescue her slippers which was swept off her feet by the running water, TOPNAIJA.NG can confirm.

Nwanedo was said to be coming back from church after a heavy rainfall when the incident occurred.

The deceased, said to be a primary four pupil of Holy Child Primary School, Onitsha, was the first child of her parents.

She was found dead on Saturday in a drainage channel along old market road.

Narrating her ordeal, the mother of the deceased, Mrs Amaka Nwanedo, said her little daughter was returning from church after the heavy rainfall when the incident occurred

The mother said, “She was on her way back home from a Block Rosary Centre at Benjamin’s lane after a downpour when her slippers slipped off her legs and fell into the flooded drainage.

“In an attempt to retrieve the slippers, she was swept off by the flood.”

She said efforts made by passersby to rescue Oluebube failed, adding that her corpse was later found after a long search.

The deceased’s corpse was said to have been immediately, after it was recovered, taken to her home town for burial.

Meanwhile, resident of the commercial city of Onitsha same Friday suffered devastating effect of flood, which swept away property belonging to residents of some parts of the city.

A resident of the city, Mr Alphonsus Nchedo told press men that owners of shops around Egerton Street lost most of their wares to the flood as water permeated their shops, destroying wares worth millions of Naira.