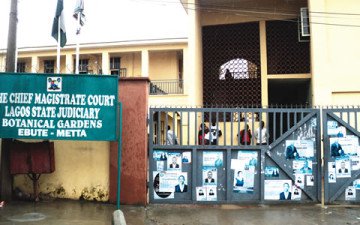 Rose Patrick, 25-year-old housekeeper, and Mohammed Abdulazeez, the 26-year-old driver of spouse of an ex-Super Eagles international, have appeared before an Ikeja Magistrates’ Court for allegedly stealing N150 million worth of jewellery.

The accused were arraigned alongside Esther Pam, 28, a friend of the housekeeper. The trio are facing a two-count charge of conspiracy and stealing.

They all denied the charges.

According to the prosecutor, Insp. Peter Nwangwu, the trio committed the offences on Dec. 10, 2016 at the complainant’s residence in Ikoyi, Lagos.

“The complainant (Mrs Oyindamola Odegbami) on Dec. 10, 2016, discovered that sets of jewellery as well as some personal effects were missing from her bedroom.

“A big set of gold and diamond encrusted pendant valued at $50,000 (N25 million) as well as other valuable personal and household items such as an iPad, three Blackberry mobile phones, six Ankara fabrics etc,” he said.

According to the prosecutor, the complainant after noticing that the items were missing, realised that Patrick, her housekeeper, who has yet to return from a holiday that ended over two weeks ago was responsible for the theft.

“The complainant reported to the authorities and Patrick was apprehended at the home of her boyfriend, one Cpl. Mathias Hussein, a mobile policeman of Mopol 43, Lion Building, Obalende, Lagos.

“Police investigations also revealed that Abdulazeez, the complainant’s driver and Pam, Patrick’s friend also domestic staff at a nearby house, had aided Patrick in stealing the items in suitcases.

“On interrogation by the police, Patrick admitted stealing Mrs Odegbami’s household items and personal effects, but denied taking the jewellery.

“The property she admitted stealing were recovered from the Mobile Police Barracks residence of her boyfriend, Cpl. Hussein at Obalende, Lagos,” Nwangwu told the court.

Speaking to NAN after the court proceedings, Counsel to Mrs Odegbami, Mr Kennedy Osunwa, said Cpl. Hussein, is yet to be arraigned in court with the other accused.

“The police are yet to charge and arraign Cpl. Mathias Hussein, for conspiracy and retention of stolen property in his official residence,” he said.

In her ruling, the Magistrate, Mrs Y.O. Aje-Afunwa granted each of the accused N2 million bail with two sureties each in like sum.

Aje-Afunwa said the sureties must be homeowners who must provide evidence of two years tax payment to the Lagos State Government.

She adjourned the case until Oct. 17 for trial.

Osinbajo will be President soon, Atiku will take over in 2019 – Prophet Chukwudi