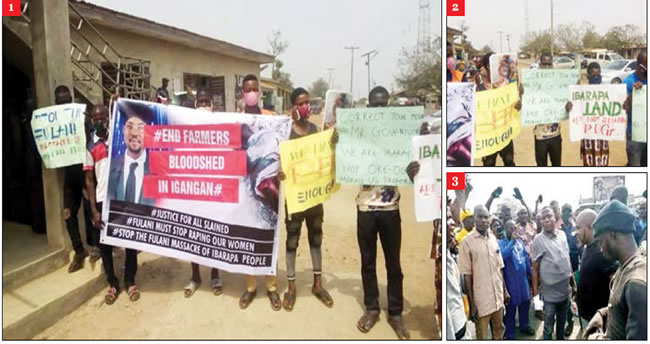 After seized hectares of farmlands at Ayete in the Ibarapa area of Oyo State, Fulani herdsmen further consolidated their hold on the farms despite the visits of the state Governor, Mr Seyi Makinde, to the area on Sunday and Monday.

The Asawo of Ayete, Oba Emmanuel Okeniyi, in an interview with one of our correspondents on Monday, said the leader of the herdsmen, Iskilu Wakili, had invited his armed kinsmen to join him on the farms. He added that the herdsmen had started cutting down cocoa trees and burning cashew plantations,

Farmers in Kajola and Gbagban Idere village, under Ayete, who spoke to The PUNCH, confirmed what the traditional ruler said.

One of the farmers, Peter David, lamented that Wakili had taken over the farmlands. According to him, security agencies have not gone to the villages to dislodge the herdsmen, who forcefully took over people’s farmlands

Recall that David had on Sunday appealed to a Yoruba rights activist, Chief Sunday Adeyemo, popularly known as Sunday Igboho, to rescue them from a group of herdsmen led by Wakili.

They alleged that Wakili and other herdsmen were driving farmers away from their farms.

On Monday, the state governor continued his trouble-shooting visit to the Ibarapa area, which he started on Sunday.

Makinde visited some towns in the Ibarapa area of the state to feel the pulse of the people over the alleged killings, rape, and massive destruction of the farms of the indigenes by criminal Fulani herdsmen.

Residents of Ayete told one of our correspondents that neither the governor nor security agents visited the two villages, where Wakili and other herdsmen had seized control of farmlands. David revealed on Monday that the governor did not visit the villages and Ayete.

When one of our correspondents asked the Asawo of Ayete, whether Makinde went to the villages during his visit or not, the monarch said no.

He said, “He did not go there. We said it to his hearing today. He deployed Amotekun to Ayete on Saturday but they (Amotekun) have not gone to the area to confront him (Wakili).

“I was told that the man had brought so many of his armed kinsmen to the area. We are only depending on God to conquer him for us. He is heavily armed, as I was told.

“I was told he was cutting down their cocoa trees and that he had burnt many cashew plantations there. This is the time to harvest cashew and that is a big loss to the farmers.”

The governor visited Igangan which is the epicentre of the herdsmen crisis but he was welcomed to the town by some youths, who seized the opportunity to register their displeasure.

Makinde started the tour of Ibarapaland on Sunday with a meeting he held with stakeholders at Igbo-Ora on Sunday night.

IGP to be jailed as court arraigns police boss for contempt