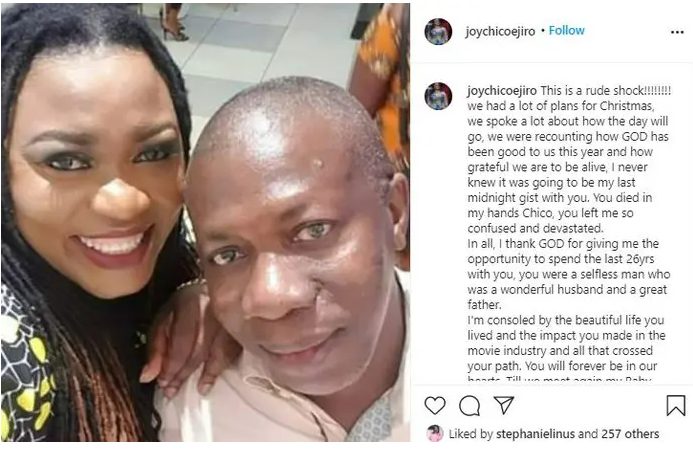 The wife of the late filmmaker, Veteran Nigerian filmmaker Chico Ejiro, simply identified as Joy has revealed he died in her hands-on Christmas day arms on Christmas Day.

According to Joy who revealed, she gisted with her late husband at midnight before he died on Christmas day.

Kemi Filani News recalls that the late filmmaker, Chico Ejoro died after suffering a seizure on the 25th December 2020.

”This is a rude shock!!!!!!!! we had a lot of plans for Christmas, we spoke a lot about how the day will go, we were recounting how GOD has been good to us this year and how grateful we are to be alive, I never knew it was going to be my last midnight gist with you. You died in my hands Chico, you left me so confused and devastated.
In all, I thank GOD for giving me the opportunity to spend the last 26yrs with you, you were a selfless man who was a wonderful husband and a great father. I’m consoled by the beautiful life you lived and the impact you made in the movie industry and all that crossed your path. You will forever be in our hearts. Till we meet again my Baby Boy, I will have plenty gist for you my best friend.”

Chico Ejiro died on 25 December 2020. He was a Nigerian movie director, screenwriter, and producer. Little is known about Ejiro other than he was born in Isoko, Delta, Nigeria, and that he originally studied agriculture, and he was drawn into video production because Nigerians would not buy blank video cassettes.

His enormous body of work was typical of the second generation that started in the 1990s when cheap video-production equipment became available in the country. He owned a production company called Grand Touch Pictures, which is based in Lagos.

Related Topics:Chico Ejiro dead
Up Next