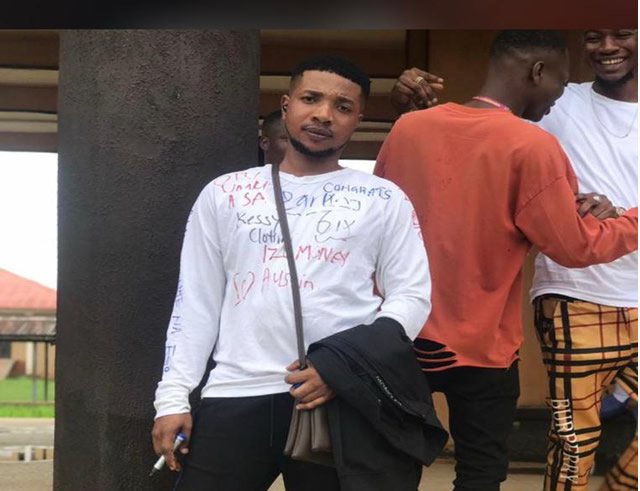 A 400-level student of the Department of Political Science, University of Benin (UNIBEN), Austin Izu, has been shot dead by unknown gunmen in his friend’s off-campus hostel room on the Federal Girls College Road, Ugbowo.

Top Naija learnt that the deceased, Izu who took his final examination last week, was alleged to have come from the upper floor of the hostel to pay a visit to his friend, Walter Emaka, who stays on the ground floor of the same hostel.

The gunmen were stated to have come into the room and shot the deceased in the head, while Walter barely got away with gunshot wounds.

A source in the school, who did not want to be named, informed Top Naija that the case was reported at the BDPA Police Station under the Ugbowo Division.

“I know the deceased. His name is Austin, a Political Science student, who signed out last week. He resided on Adolor Road. He just went to visit his friend when the incident happened. The case has been reported at the BDPA Police Station and his injured friend is on admission at the University of Benin Teaching Hospital,” the source said.

When contacted, the Public Relations Officer, UNIBEN, Dr Benedicta Ehanire, disclosed that she learnt of the incident, but insisted that no student was murdered.

She said, “We learnt of the attack. The boy (Walter) is in hospital receiving attention. No student was killed.”

Bello said, “The case was reported by someone in Ugbowo. He came to the station with the lifeless body of one Austin Izu.

“We visited the scene of the incident. It was gathered that four armed men wearing face masks entered the room and shot at the deceased and one Walter Emaka. Emaka was shot in the upper arm and is responding to treatment at the UBTH. Four expended cartridges were recovered from the scene with photographs taken.

“The corpse has been deposited in the UBTH mortuary for autopsy and preservation. Investigation is on to arrest the suspects. The case will be transferred to the State Criminal Investigation Department.”

24-year-old gets death sentence for stealing phones in Ekiti