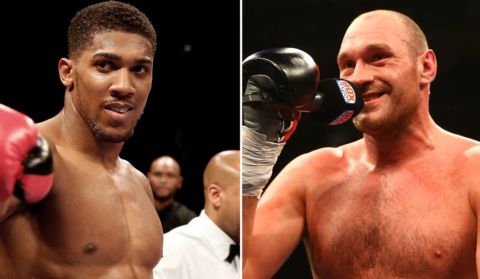 British heavyweight boxer, Tyson Fury has once again initiated a scathing media attack at Anthony Joshua, his fellow Briton and the unified world heavyweight boxing champion, to “grow up and fight somebody” of note to defend his heavyweight titles.

The 30-year-old former champion, who was stripped of his WBC title, which was then won by the 29-year-old Joshua, after he knocked out Wladimir Klitschko, attacked him while speaking at BT Sport studio in the lead up to his upcoming fight against Tom Schwartz in Las Vegas.

The Manchester-born native accused Joshua of cheap talks of fighting worthy opponents while he sets up fights against untested boxer.

“Joshua is in my rear-view mirror,” Fury declared.

“I’m fed up with hearing the same stuff from Joshua about how he wants to fight the best. It’s time for him to prove it. To man up. To step up to the plate.

“He is stuck in a certain year. The big fights ain’t [sic] happening for him. He needs to grow a set of nuts and step up to the plate instead of talking about fighting the heavyweights. People are sick of hearing all the same stuff with him. Grow up and fight somebody.

“You have to prove yourself in the boxing ring, that’s how boxing works. Ive had to prove myself time and time again. Step up and fight somebody, that’s how the cookie crumbles. I’m fighting tall people because we are all tall in the heavyweight division.”

Joshua had hoped to face the winner of Fury and Wilder, but the 2018 bout was scored a draw, with no rematch deal in place yet.

All three boxers have, however, chosen unheralded opponents to make some fast buck and gain fitness, while their promoters try to sort out a deal which would surely excite the boxing world.

Tyson “Gypsy man” Fury will fight undefeated but unknown German, Tom Schwartz (24-0-0) on June 15, with the hope of a future date with Joshua, who would also defend his belts on June 1, in the United States — his first fight on US soil — against Andy Ruiz Jr.