Governor Wike is yet to pay the N10M he promised – Burnaboy’s Mum, Bose Ogulu reveals
Advertisement 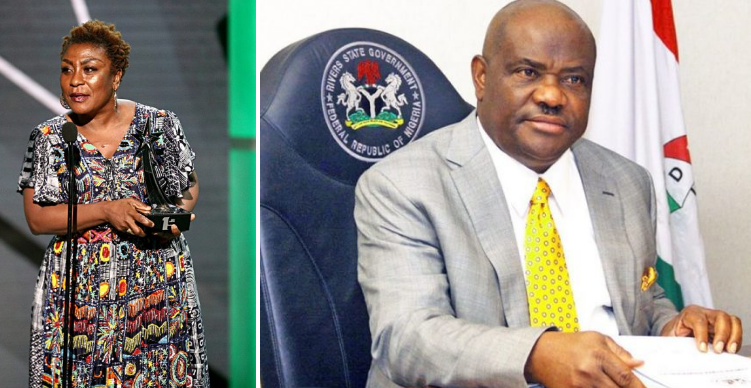 Bose Ogulu is a Nigerian academic, businesswoman and manager. She manages her son Burna Boy’s musical career and thus is also known as Mama Burna. The 63rd Annual Grammy Awards which held on Sunday, March 14, 2021, took home the Grammy Award for ‘Best Global Music Album’ with his 2020 project ‘Twice as Tall’.

At a homecoming reception in Port Harcourt organised in his honour by Rivers State Governor Wike on Saturday, March 27, 2021, the governor announced cash rewards for all the artistes who performed on the night–including Burna Boy.

However, Burna Boy’s mum Ogulu, told TV presenter Ebuka Obi-Uchendu on his Rubbin’ Minds show that her son wasn’t given any N10 million.

“The first thing was that money wasn’t paid, by the way. It was paid to everyone else but him. Everyone else who came to perform was paid, but him, because they were honouring him. He wasn’t being paid to be there. It is only a bastard, my people say, that refuses honour in his father’s house,” Ogulu says.

“I didn’t pay too much attention to it, to be honest. I was too busy. But the facts are very clear: this man was honoured because he got the highest award in his field in the world. He was honoured because he brought that award home. Why did he get that award? Making the same music that speaks the truth. So, I don’t think anybody was trying to buy him to their side or not. I think it is very clear to everyone that the man would always make the music he wants to make, whether it is for fun or didactics…whatever…he would continue to do that. It wasn’t a deal. It wasn’t a case of let’s honour you but you will not abuse us again o. That didn’t come into the conversation. It was very wise that it was done. I was particularly impressed because if any other state had done it before Rivers, it would have been shocking,” she adds.