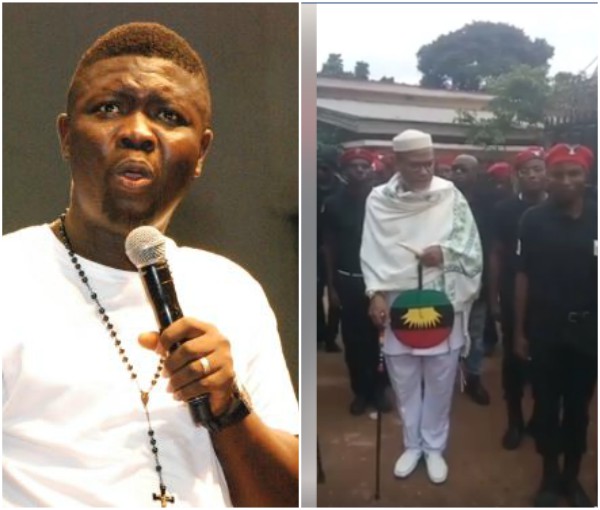 Popular Nollywood actor and comedian Francis Odega, has declared his support for Nnamdi Kanu and his group, the Indigenous People of Biafra (IPOB).

Odega, known for his ‘gerara here’ slang, explained that he was in support of an Igbo nation because the North ordered Igbo out of their region.
He said the October 1 ultimatum was a warning that the Southeast people should be on their own.

“I don’t think Nnamdi Kanu is doing bad for himself. Because when one look at it, how can some Northern youths say they don’t want us (Igbos) from their states?
“That means we are not welcomed. If one say ‘leave the North, quit the North’ that means such persons don’t want us and the only thing for us to do is to have our own.
“If someone ask me not to come to his house again, what do I do? I look for my own house. I don’t have a reason to pretend about this. If Biafra want to come let it come,”  He said

Wondering when Nnamdi Kanu will be rearrested or when Nigeria’s acting President Yemi Osibanjo will call for a referendum, Seyi wrote:
“Have you heard that BIAFRA now has a SECRET SERVICE? When will the Government rearrest Nnamdi Kanu or have a referendum? Is Osinbajo trying to be politically correct or just following the silence is golden rubbish? There are certain things you don’t condone and this is one of it. The build up of Al Qaelda, ISIS, Boko Haram etc all started like this. From formation to subtle killings and then, massive bombing and we will beginning to look for a needle in the forest.
The IGBOs in the NORTH will not come out to jointly condemn Nnamdi’s act now, but once the North start issuing threats which is not right by the way, they will break the code of SILENCE. If you don’t support this, speak now and not later.
Walls and borders have created disunity amongst us. Natural resources has become the bane of our agony. I hope we will not fold our arms and watch this Nation plunge into an unnecessary war. Anyway, before you crucify me, remember and know that my wife is Igbo and I have a daughter who is Yoru-Igbo. SILENCE on this means APPROVAL.”

Nigerians blast Juliana Olayode for lying about her virginity