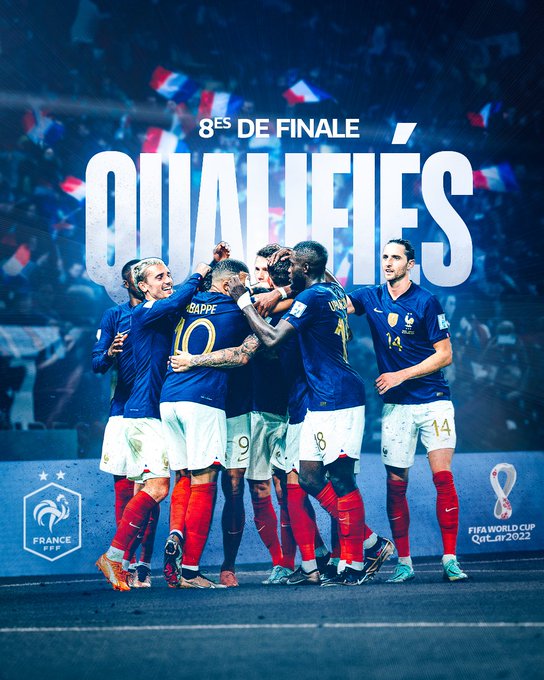 Talk about one nation in Qatar not ready to play things by the book, you have France who contrary to recent records held by former world champions in world cup tournaments, are intent on not following what has awkwardly become the tradition, as they become the first nation to qualify for the round of 16.

In order to advance to the Round of 16 of the 2022 World Cup, France has been the first country to do so.

On Saturday, the defending champions defeated Denmark 2-1 thanks to a brace from Paris Saint Germain star, Kylian Mbappe.

Just after the hour mark, the Paris Saint-Germain forward scored following a deft one-two with Theo Hernandez to make the whole affair a personal one for the Frenchman.

But Denmark’s Andreas Christensen wanted to prove the nemesis on the night with his bullet header for the Danes that settled to even the score.

Later on, Kylian Mbappe came through for France yet again as he scored what became the game’s winning goal after converting an Antoine Griezmann cross to keep Les Bleus’ perfect record in Qatar.

The 23-year-old is currently tied with Zinedine Zidane for the most goals scored by a French player (31), making him the tournament’s undisputed top scorer.

With six points, Didier Deschamps’ team leads Group D, three points clear of second-place Australia, while Denmark has yet to record a victory, holding just a point through two games.