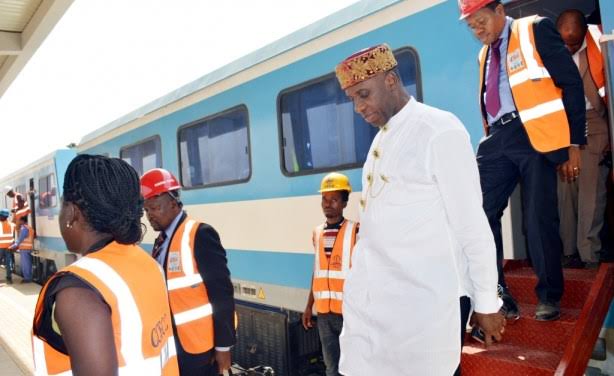 
On Friday, Nigeria’s Minister of Transportation, Rotimi Amaechi, announced that the Federal Government would need $656m to complete work on the Lagos-Ibadan railway project, TopNaija reports.

Amaechi stated this while defending his ministry’s 2021 budget before the National Assembly Joint Committee on Land and Marine Transport.

The minister said the amount was needed to put in place necessary infrastructure for the project to serve its intended purpose.

He noted that the Ibadan-Kano railway project also required $645.3m as advance payment to enable the Federal Government to complete its loan signing agreement with the China Exim Bank.

Amaechi said, “Under the railway modern programme, I am happy to report that the construction of the Lagos-Ibadan Standard Gauge line has reached 92 per cent project completion.

“However, for the project to achieve full loan drawdown from our co-financier, China EXIM Bank, and attain practical completion for it to be used for the intended purpose, some aspects of works involving construction of upgraded railway stations, signalling and telecommunication system, power supply scheme and construction of pedestrian and overpass bridges have to be completed.

“This additional and extra works amounting to $656m which is to be financed 100 per cent by the Federal Government of Nigeria has been approved by the Federal Executive Council for implementation.

“Similarly, for the implementation of the Ibadan-Kano railway, which is the outstanding segment of the Lagos-Kano railway project, one of the conditions precedent to signing of the loan agreement is the release of advance payment in the sum of $864m, out of which government has released the sum of $218.7m as part payment, leaving a balance of $644.3m.”

He said the ministry planned to complete the fencing of the Abuja-Kaduna railway line for security purposes. Amaechi stated that the Itakpe-Ajaokuta-Warri railway project, which was recently commissioned by the President, Major General Muhammadu Buhari (retd), still had an outstanding amount to be paid on the project.

He added that the ministry would commence the reconstruction and rehabilitation of the Port-Harcourt-Maiduguri (Eastern Narrow Gauge railways) next year.

The minister also said the construction of the central railway from Itakpe to Abuja and a 378km single track standard gauge rail line traversing Kano, Katsina and Jibiya with a 20km extension to Maradi in Niger Republic had been slated for next year.