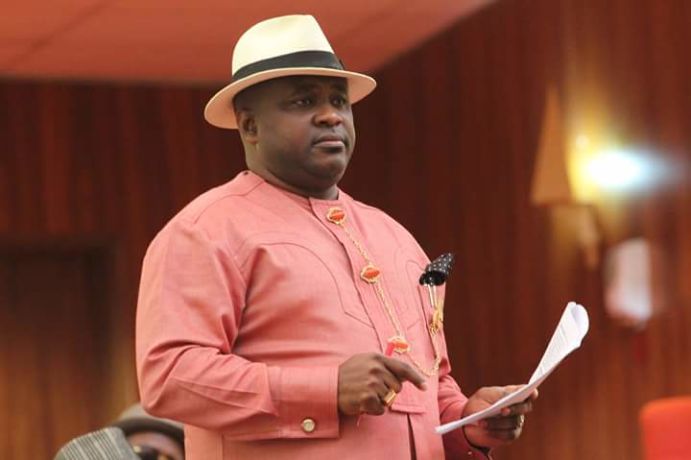 The Governorship candidate of Young Progressive Party and Senator representing Akwa Ibom northeast in the National Assembly, Obong Bassey Albert Akpan has accused Governor Udom Emmanuel of working beneath to ensure his Incarceration.

Akpan who is standing trial of accepting bribe and abuse of office while in office as Commissioner for finance had earlier admitted accepting bribe in form of bullet proof SUVs from one Jide Omokaro to aid his governorship campaign in 2015.

However as time ticks towards the Judgement slated for November 30th 2022, jittery Senator Akpan popularly called Oba has ran to prominent Nigerians to help him Starve off possible imprisonment.

A very reliable source told our Correspondent that the embattled senator had in the last few days visited the Senate President, Senator Ahmed Lawan, the Chief of Staff to the President Prof Ibrahim Gambari and the presidential candidate of APC Asiwaju Bola Tinubu with bended knees to intervene and save him from going to Jail.

He has alleged that his prosecution is politically motivated but it is clear that he has earlier admitted receiving gratification from Mr Jide Omokaro whom he influenced contracts running into billions of Naira to be awarded by Akwa Ibom state government to companies belonging to the latter.

In reaction to the accusation laid against Governor Udom Emmanuel by OBA, a major advocacy group, Akwa Ibom Integrity Alliance in a press briefing yesterday in Uyo by its Chairman, Barr Stephen Abia, said it was unfair and uncharitable for the embattled senator to transfer blames of his current travails to the doorsteps of Governor Emmanuel who neither originated the charges nor even know the facts of the case.

The group opined that to remotely or directly blame Governor Emmanuel for the probe of Bassey Akpan’s financial impropriety, was wicked and malicious.

According to him, “From investigations by our team of professionals, Governor Emmanuel was not in office as Governor, when the case of bribery and corruption against Bassey Albert Akpan commenced”.

“The case was purely on the heels of a probe of the alleged slush funds against a former Minister of Petroleum Resources, where part of the funds was allegedly linked to a certain Jide Omokoro who confessed during investigation that he used the funds to bribe Senator Albert Akpan through car donations amounting to N204million to get contracts.

“For the avoidance of doubts, the Economic and Financial Crimes Commission arrested and detained Senator Akpan over cars that he had allegedly received as bribe from Jide Omokore while serving as Akwa Ibom Finance Commissioner and Chairman of the State Inter-Ministerial Direct Labour Coordinating Committee.

“We have discovered that it is only on the basis of jurisdiction that the case could not be decided a long time ago when the trial was conducted at Justice O.A. Taiwo presided Federal High Court in Lagos, hence the case was reassigned to the federal high court in Uyo in line with Senator Albert Akpan’s argument that the offense took place in Uyo.

“When he was testifying at the High Court, Senator Albert admitted receiving the cars from Omokaro and further brought some members of his campaign team as witnesses that they were given the contentious vehicles to campaign for Albert’s elections in 2015.

“Throughout the duration of this trial and till this moment, there is no record that the Akwa Ibom State government was a party in the case, nor can it be said that Governor Emmanuel or any of his appointees had testified in the case. It is therefore worrisome that Senator Bassey Albert would come out to castigate the Governor for a sin he allegedly committed when Governor Emmanuel had not assumed office”, the group enthused.

Our Correspondent gathered that the embattled senator is leaving no stone unturned to wade off a possible jail term which will ultimately crash his governorship ambition.