No research links Coronavirus with 5G network - Minister of Communications

Hoodlums cart away 150 bags of garri from Bayelsa warehouse 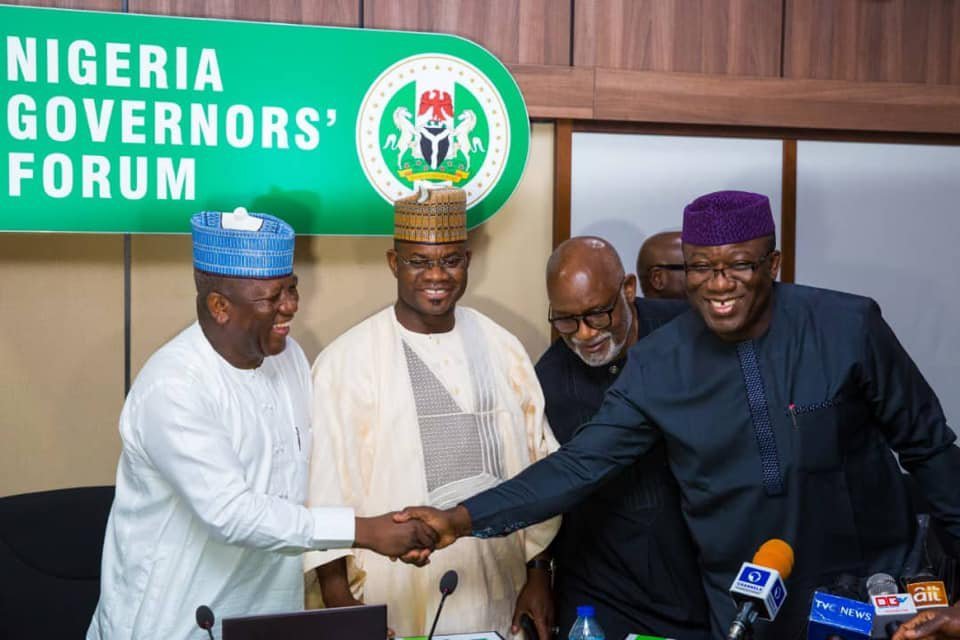 The governor of Ekiti state, Kayode Fayemi has been elected chairman of the Nigeria Governors’ Forum.

Fayemi was chosen by a consensus after he was nominated by Nasir el-Rufai, with Ifeanyi Okowa, governor of Delta state, seconding his nomination.

Abdulaziz Yari, the immediate past chairman, announced this on Wednesday evening.

He said Fayemi was unanimously elected by the governors to lead the forum till 2021.

“Members also elected Governor Aminu Tambwal of Sokoto state as the vice-chairman of the forum from 2019 to 2021,” Yari said.

He explained that Tambuwal was nominated by Akinwumi Ambode, governor of Lagos state and seconded by Rotimi Akeredolu, his Ondo state counterpart.

Reading a communiqué at the end of the meeting, Yari said that the forum was concerned with the recent guidelines of the Nigeria Financial Intelligence Unit (NFIU).

The guidelines according to him sought to impose restriction on the powers of states and local governments to operate within constitutionally approved parameters.

“The new guidelines have no legal basis under the NFIU Act and are contrary to constitutional provisions which put the State Joint Local Government Account under the legislation of the state houses of assembly,” he said.

“The guidelines will also be detrimental to the interest of States and local governments by crippling programmes such as the Universal Basic Education programme, Primary Health Care Under One Roof, as well as the payment of the salaries of teachers, medical doctor and health workers among others which are primarily funded by state governments.”

On the call by the Peoples Democratic Party (PDP) governors to declare state of emergency on issue of insecurity, Yari said that they had all agreed to meet President Muhammadu Buhari for one-on-one discussion.

“The issue of security is under the mandate of Mr president, we are supporting him because he is the Commander-in-Chief and we hope to come up with solutions with him, ” he said.

In his acceptance remark, Fayemi expressed his gratitude for the confidence reposed on him by colleagues.

He pledged to build on the achievements of his predecessors and success stories of the forum.

“We will build on commitment with strong partnership with the Federal Government as federating unit and trash out issues as amicably as possible, in the over all interest of the country,” he said.

He pledged that they would represent the interests of Nigeria irrespective of their political affiliations.

“Whatever we are going to do will be in overall interest of the nation in ensuring that our states are continuously strengthened,” he said.

“Our country derives the benefit of strong, dedicated states to our citizens and the partnership with all arms of government, development partners working with us in the over all interest of Nigeria.”

He commended the outgoing chairman and the secretariat for their commitment to states and Nigeria at large.

CAN, JNI battle over FG’s radio station for herdsmen