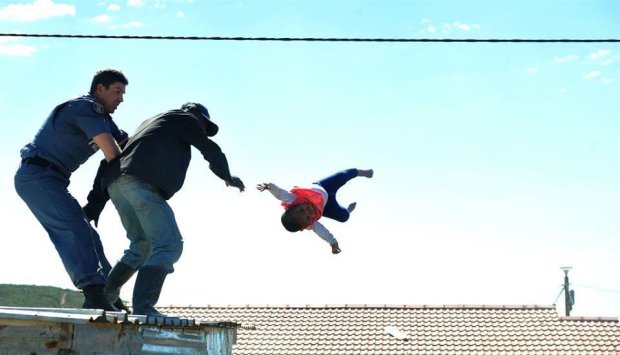 It was a heart-wrenching moment yesterday when a one-year-old toddler was tossed by father from the roof of a shack in Kwadwesi near Port Elizabeth in the Eastern Cape, South Africa.

According to the South African Police Service (SAPS), the incident took place during a demolition operation by the Nelson Mandela Metro Municipality of alleged illegal shacks in the Joe Slovo West area of Kwadwesi. Luckily, the baby was caught unharmed by other police officers who were waiting on ground.

The police service reported this on their facebook page:

Today police rescued the life of a one-year-old toddler after the father of the child threw her from the roof of a shack structure during a demolition process conducted by the Nelson Mandela Metro Municipality.

This followed after a demolition operation started at 09:30 in the Joe Slovo West area in Kwadwesi. SAPS and Metro Police were deployed to ensure the safety of the Metro Team doing the demolishing.

At about 10:40, a 38-year-old man, climbed onto the roof of one of the structures and held his one year old girl in his hands. This he done to force the team not to demolish the structure. Due to the dangerous threat to the safety of the child, police set out a plan of rescue of the girl and to arrest the male.
By 11:45, after SAPS and Metro Police surrounded the structure and having a member of the SAPS attempt to talk the man(father) down from the roof for a few minutes, the rescue attempt ensued. As the man was grabbed by police, he threw his child off the roof. Fortunately, a member of Metro Police caught the girl and the father was arrested.

The 38-year-old father will be charged for attempted murder of his daughter. The case will be investigated by the Motherwell Cluster Family Violence, Child Protection and Sexual Offences (FCS) unit. The child will be handed back to her 35-year-old mother while Social Work Services will oversee and give assistance.

By 13:00, the operation was finalised after a total of about 90 structures were demolished. During the day, various incidences happened up to 15:00 where a group of about 150 residents attempted to block the R75 (Uitenhage Road) by burning tyres and rubble. SAPS and Metro Police deployed along this route ensured that the road was opened again and safe for traffic flow.

The Motherwell Cluster Commander, Major General Dawie Rabie applauded police members for the safe rescue of the child and added “It is shocking that a father would attempt to sacrifice his own child for the sake of delaying the demolishing of an illegal shack structure. He will be facing the full result of the Law against his actions.”

Related Topics:South Africa
Up Next