US FBI screens troops ahead of Biden inauguration

Army work together with herdsmen on attacks – Ogun monarchs 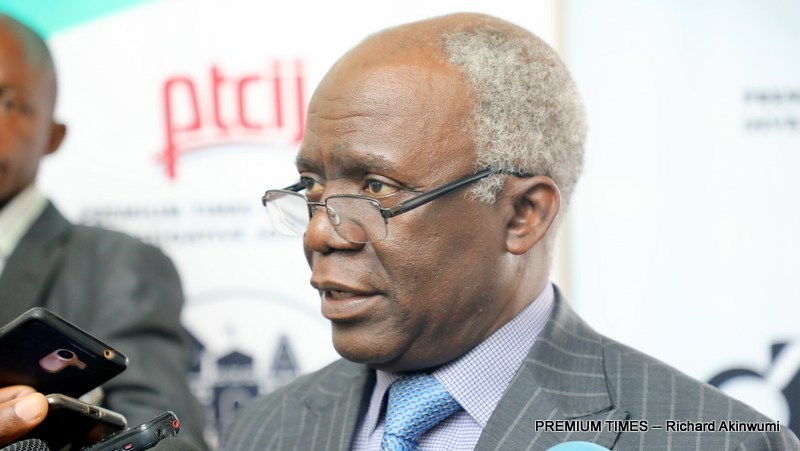 Femi Falana, Nigerian Human rights lawyer has raised the alarm over the detention of 15 Nigerian citizens by the Nigerian navy for seven months without trial, TOPNAIJA.NG reports.

The senior advocate said Dada Labinjo, a navy captain, Sherifat Ibe Lambert (also known as Mrs Bola Labinjo), a lt. commander, and 13 others have been in detention since September 2018 for an undisclosed offence and without trial.

A magistrate’s order that Lambert should be released has  been violated by the navy while the detainees have also been denied access to their lawyers and family members since they were detained, Falana said in a statement he issued on Sunday afternoon.

He called on Abubakar Malami, attorney-general of the federation, to charge the naval personnel responsible for the violations of the fundamental rights of the detainees with contempt of court and acts of torture under the Criminal Code Act and the Anti Torture Act.

According to him, “Sometime in September 2018, the Nigerian Navy arrested 15 Nigerian citizens including Navy Captain Dada Labinjo, Lt. Commander Sherifat Ibe Lambert (also known as Mrs Bola Labinjo) and Benjamin Gold for an undisclosed offence. The detainees were immediately dumped in a military detention facility at Apapa in Lagos. In order to legalise the arrest and detention of the detainees the Naval Authorities obtained a remand warrant from a Magistrate Court sitting at Apapa. But as the detainees who were incarcerated for over 3 months were not charged with any criminal offence the Magistrate Court reviewed their case on January 7, 2019 and ordered the Naval Authorities to release them from illegal custody forthwith.

“But in utter contempt of the valid order of the Magistrate Court the Authorities of the Nigerian Navy transferred the detainees to another military detention facility in Abuja. Following the application by Lt. Commander Bola Labinjo filed for the enforcement of her fundamental right to personal liberty the Federal High Court directed the Naval Authorities to release her from illegal custody. But the valid order of the Federal High Court has equally been ignored by the Naval Authorities without any legal justification. Even though the civilians among the detainees are not subject to service law the Naval Authorities have continued to detain them in military detentuon facilities.

“s if that is not enough, the detainees have been denied access to their family members, medical doctors and lawyers. Furthermore, the fundamental right of the detainess to dignity has been violated as they are being held incommunicado in solitary confinement while they are subjected to physical, mental and psychological torture in total contravention of section 3(2) of the Anti Torture Act, 2017 which provides that “secret detention places, solitary confinement, incommunicado or other similar forms of detention where torture is carried out are prohibited.”

“As the prolonged incarceration of the detainees cannot be justified under the Constitution of the Federal Republic of Nigeria, 1999 as amended or the Armed Forces Act they should be released from custody or arraigned before a competent court of law if there is reasonable suspicion that they have committed any criminal offence whatsoever. However, to curb the growing culture of official impunity in the country we are compelled to call on the Attorney-General of the Federation and Minister of Justice, Mr. Abubakar Malami SAN to charge the naval personnel responsible for the violations of the fundamental rights of the detainees with contempt of court and acts of torture under the Criminal Code Act and the Anti Torture Act.”

Fire breaks our at power transmission station in Abuja