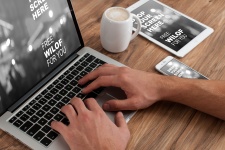 Many a time, while going through your computer, you may have noticed that the default drive on your computer is ‘C’. Ever wondered why is this so?

Geeks from earlier generation may know why this is so but if you are new to computers, this question might have crossed your mind once. Well, here’s the answer. When the first computers were developed, they didn’t come with large internal drives for storing files. Instead, they had floppy disks. Initially, a Floppy disk drive was called ‘A’ drive. Generally, Floppy disks used to come in 2 variants: 5 1/4″ size and 3 1/2″ size. So, the 5 1/4″ size floppy disk drive was usually called as ‘A’ drive and 3 1/2″ size floppy disk was usually called as ‘B’ drive.

And then came the era of Hard Disk drives. These drives were logically labeled as ‘C’ drive and they used to store the operating system of the computer. As there was progress in the field of computers, Hard Disks became cheaper and used to came with more storage. This led to the decline of Floppy Disks.

Thus, ‘A’ and ‘B’ drives were gone and ‘C’ remained. Since most of the computers have the operating system installed on ‘C’ drive, that’s why ‘C’ is the default drive on your computer.

Now, if you are someone who wants your Hard disk drives and other external drives in proper alphabetical order, you can do so.

You can change the alphabetical orders of the disk drives as you want if you have the administrative rights on the computer.

This was our guide on why ‘C’ is the default drive on your computer.

Related Topics:ComputerDriveFloppy disks
Up Next

How to remove shortcut virus from your PC and storage devices