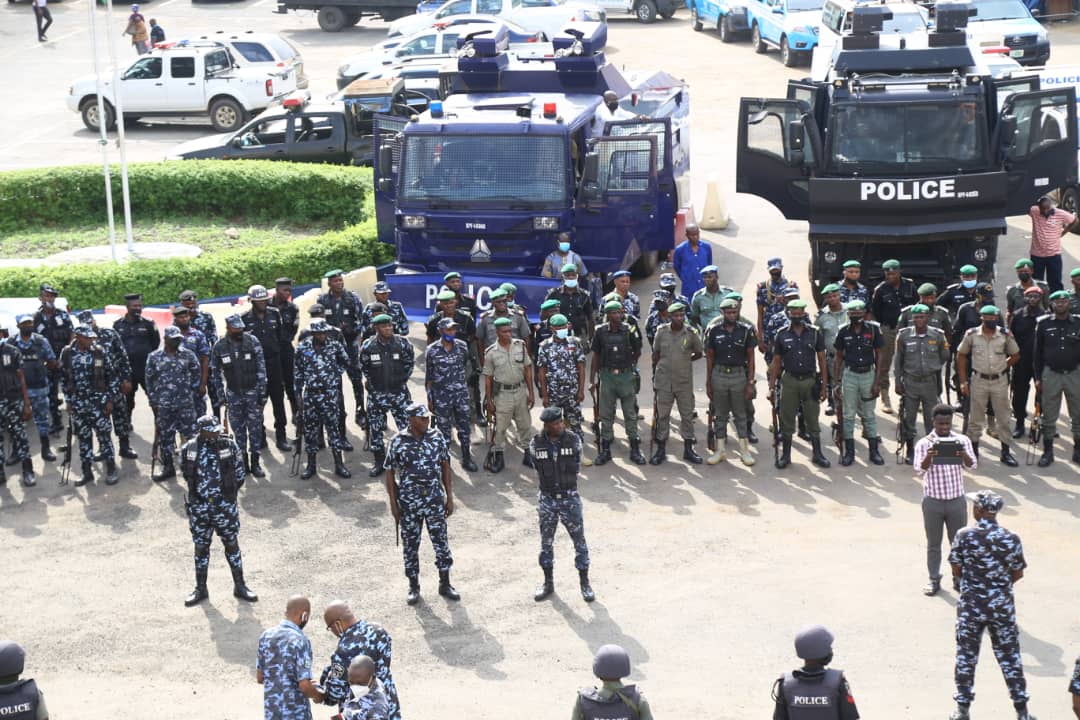 Two days after #EndSARS one year memorial protest held to honor fallen heros who lost their lives to police brutality, men of Nigeria Police are yet to vacate the Lekki toll gate in Lagos.

The anniversary was also marked in states, especially in Nigeria’s South, and in Abuja, the nation’s capital.

The commemoration was to remind the federal government of police reform and reiterate condemnation of the military shooting on October 20, 2020.

Last week, an Assistant Superintendent of Police, Isah Barnabas slapped a traveller in Okene, Kogi State, for challenging officers after collecting a bribe from a passenger carrying a laptop.

On social media, there are videos of policemen across the country assaulting Nigerians in defiance of the caution by the Force headquarters.

Adeola Oyinlade, a human rights lawyer warned the police to stop relying on the Public Order Act of 1979 to justify crackdowns.

Oyinlade recalled that on September 21, a number of retired police officers protested at the National Assembly over poor pension benefits.

“They did this because it is provided for in the constitution. The freedom of citizens to express views on a matter that affects them is a cornerstone upon which the existence of democratic society rests”, he maintained.

Citizens and organizations strongly denounce the recurring use of exercise force by the police and other security agencies,

During the latest gathering in Lekki, an Uber driver, Adedotun Clement was assaulted despite explaining that his presence was not to cause trouble.

Also at the same venue, the police arrested Abisola Alawode, a journalist working for Legit, after hitting and dragging him.

In Osun, DAILY POST correspondent, Sikiru Obarayese was beaten, arrested and charged to court within one hour on trumped-up charges.

In her judgement, the Magistrate, A. O. Daramola condemned the police action and struck out the case.

The Advocacy for Advancement of Peace & Harmony in Africa Initiative (ADAPHAI) berated the Osun command.

National Coordinator, Sulaimon Suberu demanded that CSP Oyegade Akinloye, who ordered the arrest of the journalists, be sacked.

Suberu noted that Akinloye was notorious for rights violation and displays “temperamental tendency” unbecoming of an officer.

“He is famous for manipulating judicial process to get a pound of flesh of assumed enemies”, his statement read.

“The manner in which Sikiru Obarayese was tortured and hurriedly dragged to court for arraignment on spurious charges speaks volumes.

“Such barbaric directive to clamp down on the media is practically antithetical to rule of law and democratic ethos.

“We consider officers like CSP Akinloye a threat to democracy. His type should not be allowed to superintend young policemen”, Suberu said.

Likewise, the Take It Back (TIB) Movement in Osun, warned the police and others to stop acting lawless.

Samson Tola, the Coordinator, and Owolabi Opeyemi, the Secretary, insisted that protests are citizens’ rights that would never be given up to security agents.

TIB movement further urged the police to produce the killers of Alimi Ahmed and Mutiu Lawal. Both died during Governor Gboyega Oyetola’s visit to the End SARS protest in 2020.

“The Nigeria Police should publicly apologize for attacking, arresting and dehumanizing Sikiru Obarayese.

“Protests can never be stopped in a democracy. The police and other security agencies should end the brutalization of protesters”, TIB added.

The Take It Back (TIB) movement was launched at the beginning of 2018. It was the campaign platform of Omoyele Sowore, for president in the general elections that were scheduled for the first quarter of 2019.

Related Topics:#EndSARSLEKKI TOLL GATE
Up Next

#EndSARSMemorial: How 34 hoodlums were arrested