Naira's falls drastically, now exchanges between ₦562 and ₦570 for 1$ 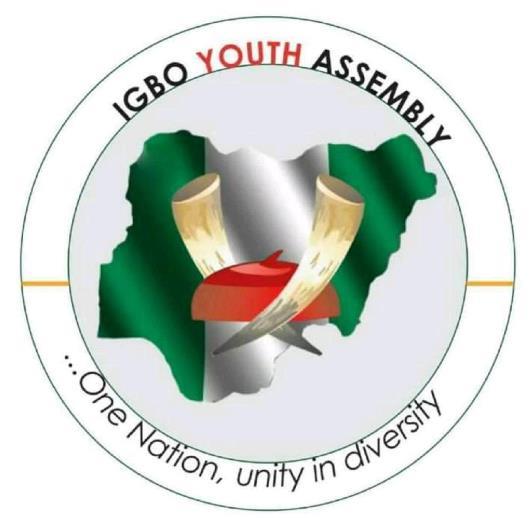 
The Igbo Youth Assembly (IYA) Worldwide has called on Nigerians, especially several ethnic nationalities to support and promote the unity, peace and progress of the nation.

IYA Worldwide in a statement signed by its Secretary-General, Casmir Irekamba, and made available to the journalists in Abuja to celebrate this year’s democracy anniversary said Nigeria is better united as one unified entity.

He said, “Nigeria has so much to benefit as a united and progressive entity, especially in the area of cultural diversity, human material resources.

“Nigeria is the giant of Africa because of its huge potentials in economic, political, military, numerical, technical powers, strength and its diversity over other African countries.”

“IYA Worldwide, therefore, calls on the promoters, sponsors, organisers, and supporters of the secessionists to redirect their efforts towards advocate for peaceful co-existence among Nigerians.”

The group further criticised the increasing level of insecurity in Nigeria saying, “As we appeal to Nigerian Youths to give peace a chance as leaders of tomorrow, the youths have no option than to safeguard Nigeria our father land.”

Irekamba said, “Our sincere condolences go to those who have lost loved ones or affected by the current security quagmire. We call on the government to do more to put the security situation in the country under check.

“For the call to restructure Nigeria, Igbo Youth Assembly Worldwide commends President Buhari on his orders for local government and judicial autonomy. We believe this should be the basis for restructuring.

“On the clamour for state police, we recommend the creation of State civil defence security. IYA worldwide is of the view that Nigeria Police and Army should remain at the federal level as symbols of national unity.

“We appeal to our dear president to continue to encourage youth development and engage patriotic youths to be mentored into leadership positions for the sustenance of national unity and growth.

“We, therefore, call on our brothers and sisters, in the spirit of National unity and patriotism to sheath sword and not fight for secession and disintegration rather advocate for peaceful co-existence among Nigerians.

“We also warn organisers, promoters, sponsors, and supporters of revolution and Secession that Nigeria is a democratic republic and has well defined process for change of government and exercise periodic cycle of elections.”

IYA worldwide called on Nigerians to support and assist the government in the nation to accomplish growth and prosperity in all its endeavours. God Bless Nigeria.